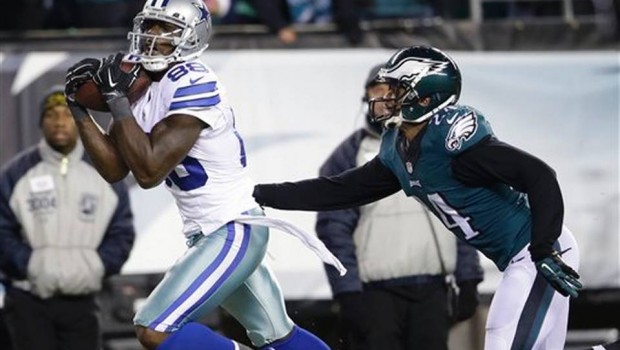 EAGLES’ QB RUSH IS ONLY THING THAT WILL SAVE BRADLEY FLETCHER

Loyalty is a wonderful quality.

A CEO or football coach engenders loyalty in his troops by bestowing it first.

Which brings me to Eagles coach Chip Kelly’s default position on Bradley Fletcher.

Dez Bryant torched Fletcher (photo above) for touchdown passes of four, 26 and 25 yards, and on Monday Kelly was peppered about benching Fletcher.

“There’ll be no … moves in the starting rotation,” Kelly said.

Defensive coordinator Bill Davis did flip-flop corners at the end of the game Sunday night, putting the more reliable Cary Williams on Bryant instead of keeping Williams and Fletcher on their sides.

But it was too late.

The only realistic cornerback options for Davis and Kelly if they decide to bench Fletcher would be Nolan Carroll or Brandon Boykin.

Asked why he’s sticking with Fletcher, Kelly said this:

“I’ve seen Fletch compete. I think he gives you everything he has, and the one thing I like about Fletch is that he’s going to compete out there.

“He made a bad turn once on a ball. The other ball, I think if you look at it really, it was a perfect football thrown by Tony and a great route run by Dez, and if you get matched up with one of the best in the league — great, tall, physical receiver — that’s a tough matchup for anybody.

“But we still have confidence in Bradley, and he’s going to be our corner this Saturday.”

Fact is, it is not Fletcher’s fault that the Eagles are intent on manning him up on some of the most vicious, coverage-destroying receivers in the league. The two worst games of Fletcher’s season have come against Jordy Nelson, who roasted him more than once down the right sideline in Green Bay, and now Bryant.

The Birds’ defensive philosophy is pretty straightforward. It has had the league’s top pass rush this year, generating pressure on a league-best 33.6 percent of dropbacks and ranking behind only the Bills in sack rate.

The Eagles leave their corners in tenuous spots because Davis is betting his front four will get to the quarterback before it matters. When they don’t, Fletcher is forced to engage in hand-to-hand combat with Bryant — and we all know how that ends.