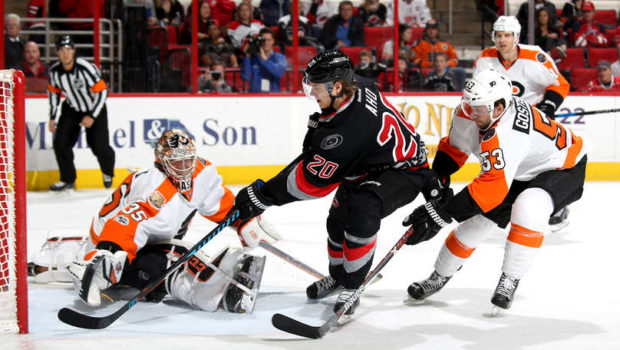 The win snapped a five-game slide for Carolina — with all the losses in regulation — and ended the Flyers’ three-game winning streak.

Aho (above), the Hurricanes’ second-round pick (35th overall) in the 2015 draft, became the first Carolina rookie to record a hat trick since Erik Cole during the 2001-02 season. It was the third multiple-goal game this season for Aho, who has 15 goals and 15 assists.

Jeff Skinner and Justin Faulk, the Hurricanes’ only representative for the winning Metropolitan Division in Sunday’s All-Star Game, also scored for Carolina. Skinner broke a string of six games without a point.

Elias Lindholm and Teuvo Teravainen each had two assists for the Hurricanes, who improved to 6-0 in their alternate black jerseys. Cam Ward stopped 15 shots in the win.

Brayden Schenn scored his 100th NHL goal, all for Philly, on a power play in the third period. Steve Mason made 23 saves for the Flyers.

The Flyers had won the first two meetings this season, but the Hurricanes are 7-1-1 in their last nine games against the Flyers in Raleigh.

“That was a disappointing way to start coming off the break,” Flyers coach Dave Hakstol said. “It’s going to be one game we address from top to bottom and get back to it tomorrow. We knew (Carolina) started very hard with intensity in this building, and they continued that through most of the 60 minutes.”

The Hurricanes led 2-0 after a penalty-free first in which they outshot the Flyers 8-4.

Aho put Carolina ahead at 7:11, taking a pass from Jordan Staal and skating across the crease before beating Mason glove side.

Aho scored his second goal at 16:37, taking Lindholm’s return pass on the right doorstep and beating Mason stick side.

Skinner made it 3-0 at 16:28 of the second. He was on the receiving end of Lee Stempniak’s pass from behind the net to the left circle and slammed the puck past Mason stick side.

“It’s nice to contribute to the win,” said Skinner, who picked up his 18th goal of the season. “When you go that long without producing it can get a little frustrating, especially when the team’s not winning. It’s part of my role to produce and help the team win, and we weren’t doing that over the last little while. But (Stempniak) made a nice pass to me, and it’s good to get one in.”

Aho completed the hat trick on a power play at 18:05, going to the upper right corner of the cage from the left circle on Lindholm’s feed from behind the net.

Faulk made it 5-0 during a 5-on-3 power play at 5:10 of the third, scoring from the right point with Aho getting the primary assist.

“I didn’t think our guys were nervous. I thought we had a good practice yesterday and a good skate this morning,” Peters said.

Schenn scored on a power play at 10:27. Shayne Gostisbehere got the primary assist.