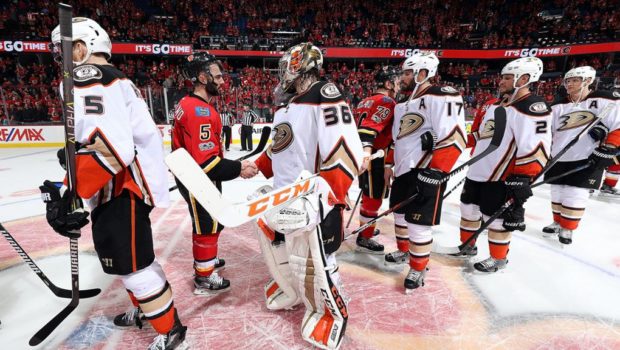 The Anaheim Ducks became the first team to advance in the Stanley Cup Playoffs when they swept their Western Conference first round series against the Calgary Flames with a 3-1 win last night in Calgary.

“It’s big. I think any time you can put a team behind you, you definitely want to take advantage of it,” Ducks captain Ryan Getzlaf said. “You never want to give life. They’re a resilient bunch. They battled right to the end tonight and made us earn it, that’s for sure.”

Getzlaf, Patrick Eaves and Nate Thompson scored, and John Gibson made 36 saves for the Ducks, who swept a best-of-7 series for the fifth time in their history. They will play the winner of the first-round series between the Edmonton Oilers and San Jose Sharks, which is tied 2-2.

“We obviously got some guys injured now,” Gibson said. “I think any time you can get rest and get people healthy, it definitely doesn’t hurt.”

Sean Monahan scored and Chad Johnson made 20 saves for the Flames, who were eliminated by the Ducks in their previous appearance in the Stanley Cup Playoffs in five games (Western Conference Second Round, 2015).

“It [stinks],” Monahan said. “Getting into the playoffs, it’s the most fun to play hockey in the playoffs, and you go out in four [games]. It’s not a good feeling. We’ve got a good team here and we’ve got to get ready to go for next year.

“Right now and throughout the summer, getting swept in four is going to sting. But coming back next year, this is an exciting team to be on.”

Eaves scored on Flames starting goalie Brian Elliott from a sharp angle along the boards just below the hashmarks on the Ducks’ third shot of the game to take a 1-0 lead 5:38 into the first period. The goal prompted Flames coach Glen Gulutzan to pull Elliott for Johnson.

Elliott, who finished with two saves, allowed five goals on 27 shots in Game 3 and entered Game 4 with a 3.67 goals-against average and .887 save percentage in three playoff starts.

“As a goalie, you take pride on giving yourself and your team a chance to win every night,” Elliott said. “That [goal] off the bat, I still can’t explain how it goes under my pad there. I feel bad. I didn’t give our guys a chance right off the bat.”

Thompson scored on a rebound to make it 2-0 at 6:46. It was the second shot Johnson faced.

Monahan made it 2-1 at 16:07 of the second period, and Johnson stopped Corey Perry’s initial shot from the slot and rebound attempt by Chris Wagner two minutes into the third.

Gulutzan pulled Johnson for an extra attacker with 2:39 remaining, but Gibson stopped two shots before Getzlaf scored to make it 3-1 with 6.7 seconds left.

“You learn from things,” Getzlaf said. “We have a lot of guys in this room that have been through a lot of things. We have a lot of young guys too that are learning along the way, but it’s our job to settle things down and play the way we did throughout the end of this one.”