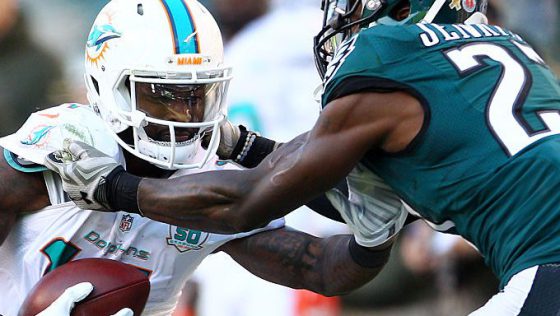 FISH AND FOWL! EAGLES AND DOLPHINS PRACTICING TOGETHER!

So the Eagles will practice today and tomorrow at the NovaCare with the Miami Dolphins in advance of their Thursday night game at the Linc.

It’ll be hot, physical and competitive.

The Broncos and 49ers practiced together last week, and no fewer than three fights broke out on Thursday alone, according to the Denver Post.

In Jacksonville, Jaguars wide receiver Arrelious Benn threw a punch at Buccaneers linebacker Adarius Glanton, one of several skirmishes between those teams in recent days.

“There’s a game feel to it, and it is very competitive,” Fish coach Adam Gase told the Miami Herald recently. “Really, the hardest thing is to just keep everybody focused on what they need to do in practice to get better because they do know there’s no flags, you’re not going to get ejected from the game or fined, and that’s where it can get kind of messy and guys get in fights. If you can keep your guys focused on what you’re trying to do, it’s great competition.”

Gase has known Eagles coach Doug Pederson “for a while;” they were in the same division for two years — Gase with the Broncos, Pederson with the Chiefs.

Gase is leaving the practice specifics up to Pederson.

“When I had my discussions with Doug I was like, ‘You tell us what you want to do and that’s what we’re going to do,’ because we’re going to them,” Gase said. “I always kind of looked at it as we’re there, we’re going to do what they do, and it’s easy for us to adjust. If somebody was coming here, it would probably be more than likely we’d be using our practice schedule.”

Gase added: “It’s fun for guys to go against somebody different instead of hitting their teammates. They’re going against a different team and a different style of ball. Like for us, we’re going to be doing Philly’s practice schedule and just for our guys to kind of have a different sense of what we do compared to what they do. It’s nothing but good experience when you get to do these joint practices.”