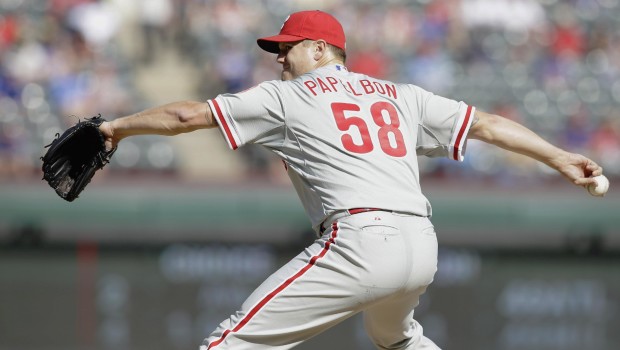 FIRST OF MANY PLAYERS-ONLY MEETINGS IN PHILLIES’ YOUNG 2015

Something tells me yesterday’s team meeting, organized by closer Jonathan Papelbon, won’t be the last of the Phillies’ young season.

“It was a team meeting about baseball,” Papelbon (photo above) said before a 6-1 loss to the Mets, “About playing the game. It wasn’t a big deal.”

The Phillies have plenty of things going on these days, but very little going well. They fell to 3-6 partially because right-hander Jerome Williams allowed five runs in five innings, but also because the Phillies went just 2-for-16 with runners in scoring position. They had runners on first and second with no outs in the sixth, seventh and eighth innings, but none scored.

“I think it has been a trend here the last four or five games,” said Phillies third baseman Cody Asche, who went 3-for-3 with one walk to improve to .500 (12-for-24) for the season. “We kind of need that big hit, a two-out double here and there to really spark something. It’s going to come. It’s still early. There’s no need to panic or have knee-jerk reactions. But we do need a big hit. I think that would help a lot.”

The Phillies are 29th out of 30 teams, hitting .159 (11-for-69) with just two extra-base hits with runners in scoring position this season.

“That’s the first thing you ask for is base runners and opportunities,” Phillies manager Ryne Sandberg said. “Couldn’t come up with a drive to put up a crooked number. We had the opportunities. Could not do it.”

Will they? The Phillies entered the night tied for eighth in baseball with 59 runners left on base — they left 11 on base Wednesday — which is saying something considering they ranked 23rd with a .278 on-base percentage.

Their lack of extra-base hits has contributed to that.

Asche had a double Wednesday. Rookie Odubel Herrera had two doubles and a triple to become the first Phillies player to have three extra-base hits in a game since John Mayberry Jr. on June 12 last season. But the Phillies’ offense otherwise remained powerless. It has been for most of the season.

“Don’t press, keep grinding and have good at-bats,” Asche said. “The law of averages has to take over sometime. The hits are going to come.”