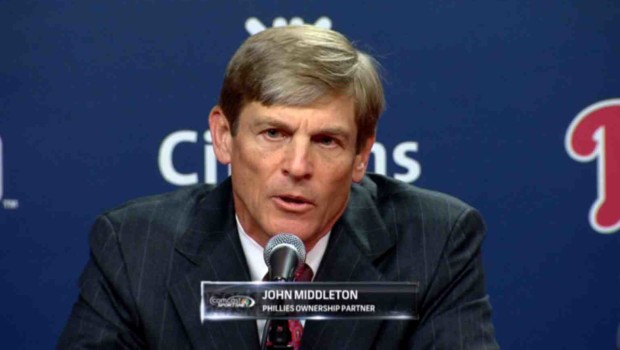 Owning and managing a sports franchise in 2015 isn’t child’s play.

It’s not for the faint of heart or the weak of mind.

If you don’t believe me, ask anyone in the business.

I knew the Eagles were on the right track when they hired Chip Kelly to replace the spent and spiraling Andy Reid.

But I really knew that the Birds meant business when they demoted Howie Boy Roseman, a puffed up office boy who had somehow become general manager, and elevated Chip Kelly to be the team’s all-knowing Supreme Leader.

And now the Phillies have had their ah-ha moment.

Firing general manager Ruben Amaro Jr. was not an easy decision within the friendly confines of the Phillies’ paternal organization that has always been adverse to change for the sake of change.

And John Middleton, the team’s highest profile equity investor, deserves the credit. He is loathe to call himself managing partner — or anything! — but he went a long way yesterday toward winning back the trust and faith of the millions of Phils fans who remember the Red Octobers of 2007-2011 and wanted them again.

Amaro, in my view, deserved to go for all the right baseball reasons — he had become GM when the Phillies were in their mini-dynasty of two straight World Series appearances, and yesterday, six years later, they have the worst record in baseball.

But Mike Sielski, the fine Inky columnist, hit the nail on the head when he said that Amaro’s firing offense was his regular insulting reaction to fans and their criticism — “they don’t understand the game!”

It is the most obvious takeaway from the news conference that the Phillies called Thursday afternoon to announce Amaro’s firing as their general manager. The ever-louder voice of the team’s ownership group, Middleton paid lip service to Amaro’s successes – the three consecutive NL East titles at the beginning of Amaro’s tenure, the 2009 World Series appearance, the creation of the 2011 Four Aces pitching rotation – but he could hardly hide how the failures and unforced errors ate at him.

Seated next to new team president Andy MacPhail, Middleton began his remarks Thursday with an acknowledgment of and appeal to Phillies fans, and it was easy to trace a line from those words to the last four years: the Phillies’ fall in the standings, the plummeting home attendance, those incendiary and foolish comments Amaro made to Comcast SportsNet in May about how many fans “don’t understand the game.” By Middleton’s own admission, all of those factors were already on his mind when MacPhail, after a two-month review of the organization, came to him and said it was time for a new GM. It was the answer that Middleton obviously wanted to hear.

“If you ask people who work for me directly, most of the time when they’ve come to me with a decision like this, I’ve accepted it,” Middleton said. “But there are times when I’ve looked at it and said, ‘You know what? We’ve had a conversation. You told me what you want to do. I’ve pushed back on it. You’ve told me I haven’t changed your mind. I’m pulling rank on you.’ I’ve done that.”