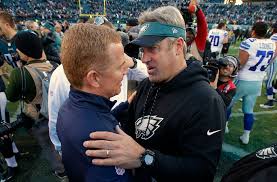 Jason Garrett is the new offensive coordinator of the New York Giants.

“I’ve known about Jason for a long time, not only through the general public as well-known as he is as head coach of the Cowboys,” Judge said. “There were guys I worked with that I came across in my career at both Alabama and at the New England Patriots that worked with Jason through their time in Miami with him. They consistently all reflected on how smart he is, how great a teacher he is and how his perspective of the game was through a different lens than most coaches. And when he sees it, he’s able to communicate it and paint that mental image to the players. And he does a fantastic job of making in-game adjustments.”

The 53-year-old Garrett had interviewed with Judge and the Giants on Wednesday. He was offered the job not long after but opted to head home first to discuss it with his family.