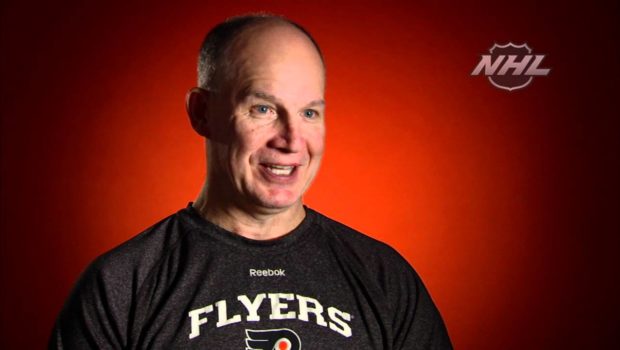 Let me see if I got this right.

The Flyers sucked all year.

So someone had to go.

And they went all off-with-his head on assistant coach Joe Mullen!

The Flyers were No. 1 in the NHL on the power play (25.0 percent) on Dec. 10, then went into a spiral, finishing the season at No. 14 (19.5 percent), and Mullen was the chief architect of the power play and had been here 10 years, spanning four head coaches.

“There’s no easy answer there,’’ coach Dave Hakstol said at yesterday’s exit news conference. “You try to break it right down into every detail. On some nights we simply weren’t able to execute, maybe weren’t as sharp as we could be. There were a lot of nights where we generated very good opportunities and just weren’t able to finish on those opportunities.

“So when I look at the process of our power play even as we went down the stretch, I saw a lot of nights where the opportunities were there, the effort was there and some of the togetherness was there but the number one unit was pretty good. We didn’t come up with the results.’’

“We’ve got such a good group,’’ Hakstol said. “With Joe not coming back, that’s a harsh reality. I can’t imagine a better person than Mully. As we move forward, it’s going to be something that Ron and I spend some time, go through a good process. Most importantly, it’s what’s right for the staff.

“How do you strengthen the abilities, the talents, the everyday workload of our staff? That’s going to be my beginning point. Like I said, that’s something we’ll work through over a time period, as long as it takes.’’

Inconsistency killed the Flyers and it’s something Hakstol couldn’t explain.

“I can pinpoint a couple different areas,’’ he said. “But in general, if I look at the last 10 days of December and really our month of January, is really the area where we got away from things and where the season got away from us.

“You carry that through the results in February, I don’t know if you want to generalize it to a month weren’t all that much different, but through that month of February we were playing some pretty good hockey. We had some tough results on nights that we played really well.’’

Jake Voracek said Tuesday that if the Flyers don’t start winning some playoff series (one in the last six years), the core group might be broken up.