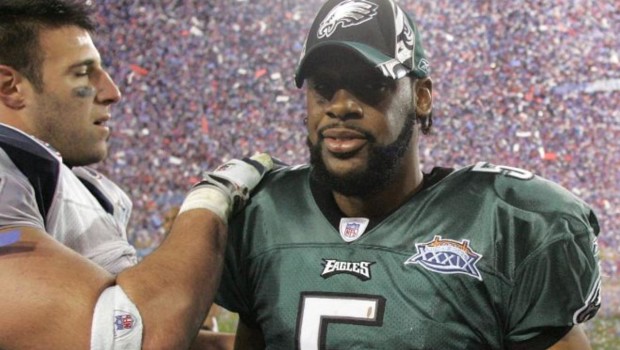 FIND OUT WHY 2005 EAGLES ARE THE 2ND-BEST SUPER BOWL LOSERS!

The two conferences were dramatically imbalanced in 2004. Nine AFC teams outscored their opponents by at least three points per game, but only one NFC team did: the Eagles. And the quality of the Eagles is somewhat obscured in retrospect because they were really 13-1, not 13-3. Andy Reid sat Donovan McNabb and other starters after one series in Week 16 and gave away their last two games with backups. However, the Eagles were one of the 12 best teams in DVOA history going into Week 16. They won their first two playoff games easily, even with Terrell Owens on the sidelines with a broken leg: The Vikings needed a last-minute touchdown to get a 27-14 loss, and the Eagles shut down the Atlanta offense in a 27-10 win in the NFC title game. Owens returned and played in the Super Bowl injured, but the Eagles couldn’t keep up as Tom Bradyand the Patriots won their third title: