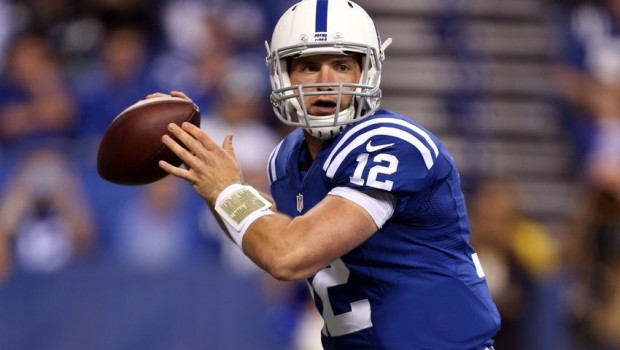 Nearly eight months after the Eagles last played a game in anger.

Four months after the draft.

The Eagles strap on the pads tomorrow for real (or surreal, if you believe the lame-ass Philly media) against Indy in the first preseason game.

Here are some details:

Both teams head into 2015 with high playoff expectations. The Colts made the AFC championship before losing to the eventual Super Bowl champion New England Patriots. While the Eagles, after going 10-6, missed the playoffs entirely. Indianapolis is hoping to take that next step and get into the Super Bowl while Philadelphia is looking to get its first playoff win in the Chip Kelly era.

Both teams are armed with two of the best offenses in the league. Led by Andrew Luck (above) and T.Y. Hilton, the Colts have one of the best passing attacks in the NFL. The same can be said for the Eagles who, with an offensive mind like Kelly, have ranked in the top five in offense the past two seasons.

While these are two of the NFL’s top offenses, there are quite a few new faces. The Colts acquired Andre Johnson to replace Reggie Wayne and signed running back Frank Gore to solidify the running game. Meanwhile, the Eagles traded for quarterback Sam Bradford, signed DeMarco Murray and Ryan Mathews to replace LeSean McCoy, and drafted Nelson Agholor to replace Jeremy Maclin.

Bradford won’t play for the Eagles on Sunday, so it will be quarterback Mark Sanchez who will get the start withTim Tebow backing him up. Bradford suggested that he wants to play, but Kelly may rest him as to keep his knee healthy and not push it.

The quarterback position is certainly one to watch in Philly, but that isn’t the only competition going on during camp. The team just lost cornerback JaCorey Shepherd to injury which opens things up at both cornerback and safety. The Eagles also need to figure out who will be playing inside at guard on the offensive line.

For the Colts, it looks as if Robert Mathis will sit out the preseason. However, there will still be plenty of players to keep an eye on.Trent Cole will be making his return to Philadelphia where he collected 85.5 sacks . The Colts are trying to figure out who will be the No. 3 wide receiver between Donte Moncrief and Phillip Dorsett. They also have some good competition trying to solidify the offensive line.

This will be a good matchup between to of the NFL’s top-tier teams. While it is one that we would rather see in the regular season, it should still be a fun preseason game to keep an eye on and is a good way to open up the football year for both teams.