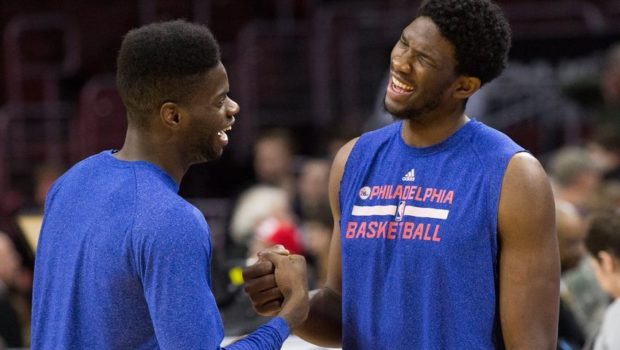 The hissing sound you are hearing is the air coming out of the Nerlens Noel trade balloon.

Sixers coach Brett Brown has eliminated Noel (above left with Joel Embiid) from the 76ers’ main rotation, and there is no timetable for his return. He is expected to play only when the team badly needs him. For example, if Joel Embiid and Jahlil Okafor get in foul trouble. Injuries to one of these guys could also be a reason for him to be utilized.

The answer to the problem began taking effect last night when the 76ers continued a three-game home stand. Hosting the Brooklyn Nets, they captured a 108-107 win but Noel never saw action. He just sat on the bench as his squad tallied its seventh victory in 27 regular season games.

Brown decided to go with Embiid and Okafor at center. Embiid took advantage of the opportunity by having a terrific showing recording a career-best 33 points.

The events transpiring are bad for Noel. So far this 2016-17 season, he played in just two games since coming back from a knee injury. A health setback that sidelined him for the first few weeks of their present campaign. His first appearance before they faced the Lakers was versus the Detroit Pistons, a game in which Philly dominated and triumphed, 97-79.

The 76ers are unlikely using Noel anytime soon. This is following his rant last Friday when their game versus the Lakers concluded. In the contest, he was on the floor for just eight minutes and recorded two points coming off the bench. Speaking to reporters after the outing, he said according to ESPN, “I think I’m too good to be playing eight minutes. That’s crazy. Need to figure this s— out.”

Noel had a meeting with Brown Saturday to clear the issue. Unfortunately, it seems the solution reached for the current dilemma is not in favor of the 22-year-old big man drafted out of Kentucky.