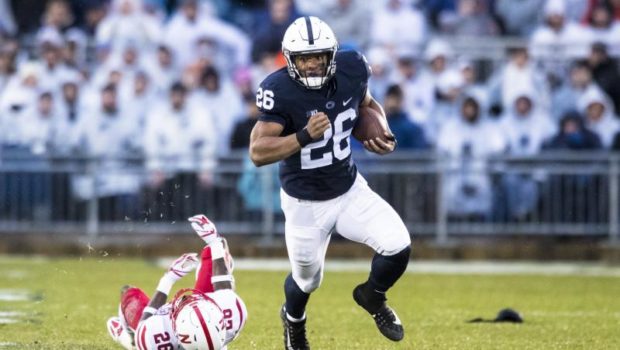 FIESTA MAY BE PENN STATE SAQUON BARKLEY’S LAST GAME AS A NIT!

This afternoon’s Fiesta Bowl game against Washington will likely be Penn State running back Saquon Barkley’s last college game, but he hasn’t decided when he’ll announce his decision to forego his senior season to enter the NFL:

“Whenever it hits me,” Barkley said, per ESPN.com. “It could be the day after [the bowl game] I know I’m going to stay or going to leave. It could be the last day [to declare].”

Barkley added that while he’s tried to stay focused on the Nittany Lions’ impending matchup with the Washington Huskies in the Fiesta Bowl, thoughts regarding a potential draft declaration have crossed his mind.

“It’s hard because it’s right in front of you,” he said. “I’m human. I have taken time to think about it. I talked to [coach James] Franklin about it before the season even started. I talked to my family about it. The best way I try to deal with it is to live in the moment and appreciate the time I have here.”