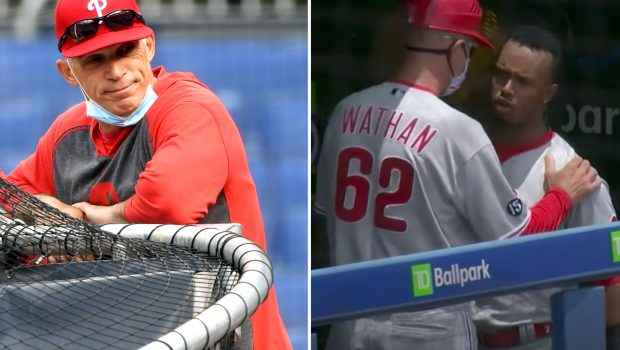 FEELING THE LOVE: PHILS GIRARDI AND SEGURA KISS AND MAKE UP!

And for now it’s not in each other’s backs!

“We love each other,” Segura said before last night’s game against the Miami Marlins, echoing what Girardi had said. “Absolutely.”

The confrontation happened Sunday night after Girardi said something to Segura after he committed an error in the first inning. At one point, Segura had to be restrained by coach Dusty Wathan.

“Everything has passed and we’re all good,” said Segura, who said he spoke to Girardi by phone during Monday’s day off. “We cleared it up, and at the end of the day, we’re here to win baseball games.

Segura made three of his four errors this season during the weekend series against the Blue Jays, including two on Sunday.

Girardi said last night only that “we take care of things” and that “I told [Segura] I love him.”

But the manager refused to get into specifics about the incident.

Said Girardi: “Every little spat that you have with someone that you love at home, you don’t go and tell everyone around you, do you?”