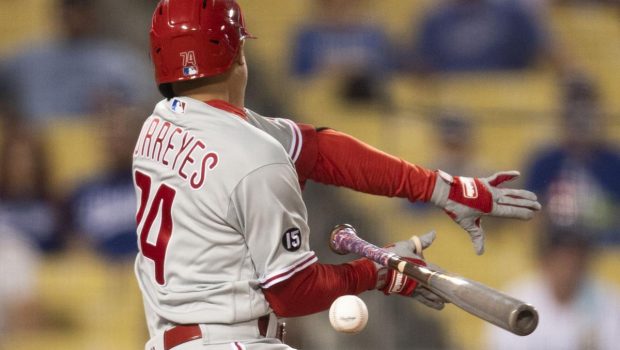 Will Smith’s two-run homer and Chris Taylor’s solo shot lifted the Dodgers over the visiting Phillies.

Pinch-hitter Albert Pujols’ single in the seventh inning was the only other hit for the Dodgers, but they hung on for their sixth victory in seven games with eight consecutive scoreless innings from seven pitchers, including starter Tony Gonsolin.

Gonsolin yielded four hits and lasted just 3 2/3 rocky innings in his second start of the season, but his bullpen allowed only four singles and didn’t walk a batter.

Bryce Harper drove in a run in the first inning for the Phillies, whose four-game winning streak ended in the opener of a six-game California road trip. While Los Angeles struggled for any baserunners at all, the Phillies stranded 10 while going 1 for 11 with runners in scoring position.

“We had some opportunities,” manager Joe Girardi said. “We didn’t cash in on them, and that was the difference in the game.”

“It’s tough,” Girardi said. “I don’t think we got much help from the umpire in the one inning with Spencer Howard and Ronald Torreyes, and that’s pretty frustrating. We got some opportunities and we didn’t cash in on them. That’s the difference in the game.”

Spencer Howard (0-2) tossed two-hit ball into the fifth for the Phils, but both those hits were homers.

Howard, a native of central California, was otherwise sharp in his first career start in the stadium where he watched Éric Gagné and Clayton Kershaw as a kid with his father, a Los Angeles-area native.

Howard retired the Dodgers’ first nine batters, and he even got his first major league hit in the second inning on a double when right fielder Zach McKinstry misread his line drive, which looked catchable.

But Mookie Betts drew a leadoff walk in the fourth, and Smith connected three batters later for his seventh homer, a 411-foot shot.

Taylor chased Howard with his ninth homer leading off the fifth.