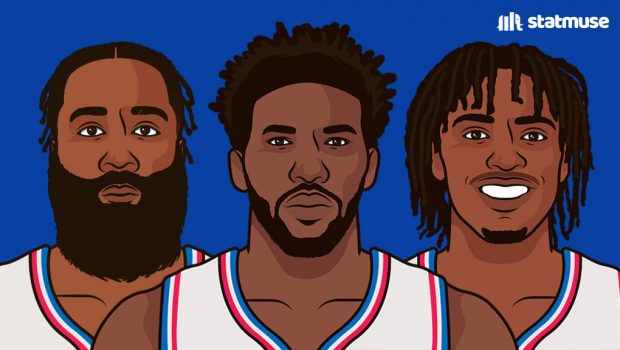 FEARLESS TYRESE MAXEY HAS BECOME THE BEST STORY IN THE NBA!

If Tyrese Maxey didn’t exist, a fiction writer would have had to invent what the 21-year-old guard has done for the Sixers.

And most editors wouldn’t believe it.

Maxey made five 3-pointers and scored 33 points to lead the Sixers to their fifth straight win, 125-119 over the Cleveland Cavaliers.

The 76ers improved to 4-0 with Harden in the lineup. Harden had 25 points and 11 assists. Embiid added 22 points and nine rebounds.

“On any given night, it can be any one of us to go off,” Harden said. “Tyrese really picked it up for us tonight.”

The second-year guard out of Kentucky hit a 3 that gave the Sixers a one-point lead, then he drained a 3 off a pass from Harden on the break that made it 110-106 and had the Philly crowd going wild.

Harden held his arms high and beckoned the crowd to get even louder.

Darius Garland scored 26 points and had 19 assists for the Cavaliers, and Isaac Okoro added 22.

Harden, who had at least 20 points and 10 assists for the third time in four games, picked up his third foul at 8:32 in the second quarter and took only four shots through three. Yet, he still had 18 points (and nine assists) on the strength of two 3s and 8 of 8 from the free-throw line.

“I’ve got to do a better job of being more solid,” Harden said. “I’ve got to be more smarter so I can be out there and help my team.”

His fast success with Embiid was expected. But his presence has turned Maxey into a knock-off Allen Iverson since his arrival.

Maxey made 76ers fans — and, frankly, the 76ers — forget about Ben Simmonswith his play this season.

He turned it on in the third quarter and brought the Sixers back from long-range, attacking the net, and even with a nifty pass off the break to Embiid.

Maxey hit two 3s and scored 14 points in the quarter to bring the Sixers back from 21 points down to grab a lead late in the third. He buried a 3, then came back right with a 12-footer to make it a three-point deficit. The speedy guard tossed the ball to Embiid for the easy bucket that sent the crowd into a frenzy. He scored 20 points for the fourth straight game, the longest streak of his career — and all with Harden.

But it was Georges Niang who finally gave the Sixers their first lead on a basket and a 3 that made it 97-93.

“He’s a shooter. That’s what he does,” Harden said.

The Cavaliers hit their first nine shots and Kevin Love made a pair of 3s to help them race to a 39-18 lead. They have lost six of seven.

“We felt and looked like ourselves for the first time in a while,” coach J.B. Bickerstaff said. “We just happened to run into a really good basketball team.”