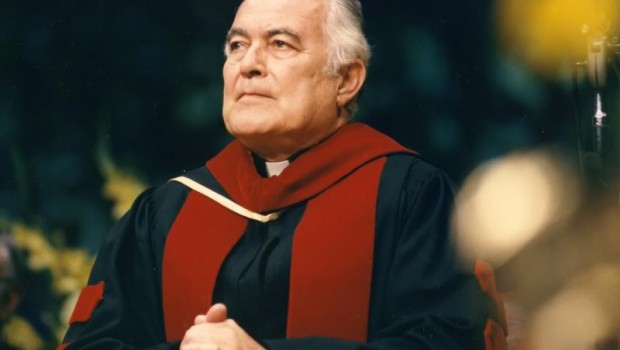 THE PRIEST WHO MADE NOTRE DAME MORE THAN A FOOTBALL SCHOOL

His official title was the Rev. Theodore M. Hesburgh, and he was president of Notre Dame from 1952-to-1986, a period that saw the small Catholic university in northern Indiana become as great an academic institution as it was a football school.

As the New York Times wrote this morning:

“As an adviser to presidents, special envoy to popes, theologian, author, educator and activist, Father Hesburgh was considered the most influential priest in America for decades. In 1986, when he retired after a record 35 years as president of Notre Dame, a survey of 485 university presidents named him the most effective college president in the country.

“Father Hesburgh held more than a dozen White House appointments under six presidents. For years, he was chairman of the United States Commission on Civil Rights and of the Select Commission on Immigration and Refugee Policy.

“Yet he was never awed by the power of the Oval Office. He tangled with the Nixon administration over busing, civil rights and other issues that eventually led to his resignation as chairman of the Civil Rights Commission. He also vehemently opposed a White House plan to use federal troops to put down campus demonstrations, eventually persuading the president to drop the idea.”

Father Hesburgh understood the special role football played in Notre Dame’s reputation. But he was not a huge football fan, and he sometimes resented the influence that collegiate sports had on higher education. At his inauguration as president in 1952, he was appalled when local newspapers sent sportswriters to cover the event, and he refused to cooperate with photographers who asked him to pose with a football.

“I’m not the football coach,” he barked at the surprised journalists. “I’m the president.”

And yet he was not averse to calling attention to Notre Dame’s football legends. When President Reagan gave the commencement address at Notre Dame in 1981, and received an honorary degree, Father Hesburgh referred in his remarks to Mr. Reagan’s role as the halfback George Gipp in the film “Knute Rockne — All American.” The dying words of Mr. Reagan’s character, “Win one for the Gipper,” had by then become stock Reagan iconography.

At the time of his investiture, Notre Dame was a small university regarded as strong in football and weak in just about everything else but theology. Father Hesburgh set out to build up the faculty, upgrade the academic standards and increase the size of the school, which admitted women for the first time in 1972. He became an effective fund-raiser, inheriting a $9 million endowment and increasing it to $350 million. Today, Notre Dame has one of the largest endowments in the nation, exceeding $9 billion.