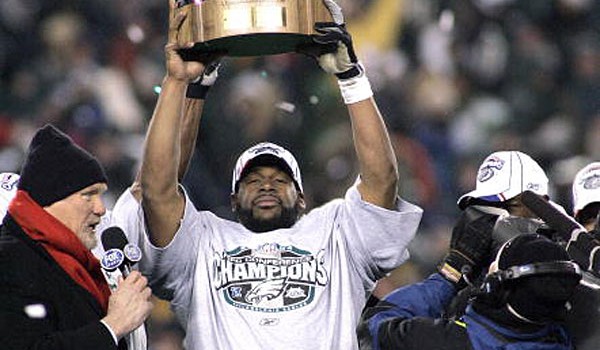 Hard as it is to believe, today is the 10th anniversary of the Eagles’ 27-10 victory over the Atlanta Falcons that sent the Birds to their last Super Bowl.

For me, it seems like only yesterday, just like the 24-21 loss to the Patriots in the Super Bowl two weeks later. The celebrations hardly were muted in Philly. Fans stood atop snow banks on Broad Street, waving Eagles banners and hats. Cars honked their horns late into the evening. Toasts were raised to Donovan McNabb, Brian Dawkins, Andy Reid — even to Swoop the mascot.

For the first time in 24 years, the Eagles were NFC champions.

“There were some tears of joy, definitely,” All-Pro safety Brian Dawkins said Monday, looking back at the locker room scene following the 27-10 victory over the Atlanta Falcons. After three straight title game flops, the Eagles were headed for the Super Bowl.

“It’s something we worked for a long time and went through a lot of bad situations — 1-2-3 of losing — so that comes flowing out,” Dawkins said. “After the tears have ceased, we’re ready for the next step. This wasn’t our Super Bowl. We didn’t approach it like it was our Super Bowl.”

Beating the defending champion New England Patriots, winners of two of the last three NFL crowns, turned out to be impossible.

But they didn’t bring their full complement offensively. Tight end Chad Lewis, who caught two touchdown passes against Atlanta, was out with a foot injury. And star receiver Terrell Owens, their offensive spark plug, was uncertain because of an ankle injury that has kept him sidelined since Game 14.

“The ultimate goal is obviously the Super Bowl,” McNabb said. “Then we can come back and celebrate in a parade on Broad Street.

“We’re excited about this win and the city having that confident feeling back. It’s a great feeling to have the opportunity to move to the Super Bowl. When it comes down to it, hey, it’s one more game. Let’s go win it.”

The only other team with such a long gap between Super Bowl appearances was Green Bay. The Packers won the first two Super Bowls, then didn’t return until January 1997, when they beat the Patriots.

Eagles coach Andy Reid was an assistant to Mike Holmgren with those Packers. He still has his notes from that postseason, but he hadn’t looked at them again until Monday.

“It’s a little different sitting there as head coach, but it still is a great feeling,” said Reid, hired by the Eagles in 1999. “Part of you is excited, another part of you understands you’re not through. There’s another game against a great football team and you want to get yourself right in preparation for that team.”

The Eagles lost 27-10 to the Raiders in their only Super Bowl trip. The Raiders broke a 19-year Super Bowl drought two seasons back, but they were routed by Tampa Bay in the big game.

McNabb was there. He’s been to the last five Super Bowls, and he hasn’t exactly enjoyed them.

“It’s frustrating, because every conversation is: ‘I expected you guys to be here,”’ McNabb said. “Well I did, too.

“Now we can go down there and have all our people smiling and you’re happy you’re there. But playing the game is something different. It’s keeping that business mind-set of going out and winning the game.”