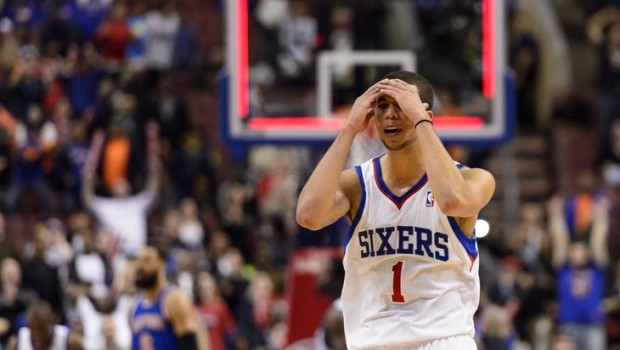 If you think the Sixers have been bad, you have been paying attention.

And tonight at the Wells the 8-33 locals meet the 6-36 Knicks, which might be characterized as:

The Knicks have the NBA’s worst record while the 76ers are tied with Minnesota for the league’s second-most defeats. New York and Philly are the lowest-scoring teams with averages of 92.7 and 90.0, and both rank near the bottom defensively.

The Knicks finally had reason to celebrate after snapping a franchise-record 16-game losing streak with Monday’s 99-92 win over New Orleans. Carmelo Anthony had 24 points and nine rebounds to lead New York to its first victory since getting by Boston 101-95 on Dec. 12.

“It’s tough, man. It’s a tough situation. We’re human, so we’re going to feel it,” said Anthony, whose team was outscored by an average of 14.9 points during the skid. “It’s definitely emotional when you’re losing games like that, but we’re sticking with it.”

The Knicks took the first matchup against the 76ers 91-83 on Nov. 22 behind Anthony’s 25 points. New York has won three straight and 14 of 19 in the series while surrendering 93.6 points per game.

Philly has dropped four of five after Monday’s 111-76 loss at Washington. Michael Carter-Williams finished with seven points while shooting 2 of 13 as the 76ers were held to 32.9 percent from the floor.

The Sixers were outrebounded 53-30 and allowed the Wizards to shoot a season-high 55.6 percent.

“There were times when you looked out at (the Wizards), and you saw a bunch of men. … And there were times sitting on the bench where you realize the difference in experience and maturity,” coach Brett Brown told the team’s official website. “It was one of those games where you stepped back and thought, ‘We really have a young team.'”

Carter-Williams had averaged 21.5 points on 50.7 percent shooting over the previous four games. He’s averaging 18.3 points, 10.5 boards and 6.8 assists in his last four against New York.

Tony Wroten, leading Philly with 16.9 points per game, is unlikely to be available after missing the last four with a sprained right knee.

The 76ers have won three of five at home after opening 0-14 there. The Knicks are 5-1 in their last six visits to Philly.