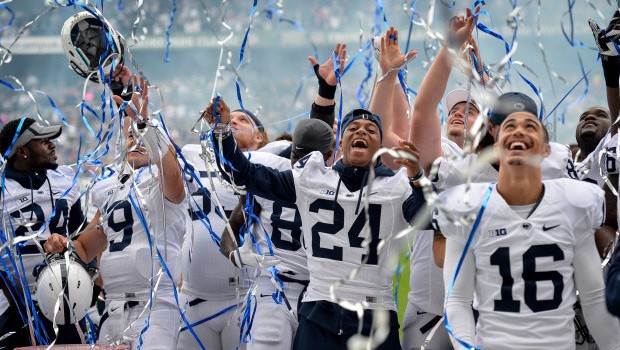 When Penn State meets Boston College on Dec. 27 in Yankee Stadium in the Pinstripe Bowl, it will be the 24th game between the two teams with Penn State holding a commanding (19-4) lead in the series.

“Their an interesting defense and he’s been this way for a long time. They don’t match personnel. What I mean by that is typically people will go to a three down front on a passing situation to get more defensive backs in the game. He will do it all the time,” says Penn State coach James Franklin.

“We’re all highly competitive. Friendships aside they want to beat us and we want to beat them. That’s the way it is. It’s a competitive world,” said BC coach Steve Addazio, the former Temple head man.

“There are times where we didn’t do enough things that it took to win the game. Whether it be closing it out in the two-minute situation against Illinois or playing well in the red zone against Ohio State,” said Bob Shoop.

Tyler Murphy the BC quarterback is a dual threat over 1,000 yards rushing and 1,600 yards thru the air. His feature back is Jon Hilliman.

“They’re a great opponent. Quarterback can run really well. They do a lot of things with their running backs and I think there a mix between Michigan State and Maryland,” said Mike Hull.

“We don’t have a true exceptional veteran difference maker to try to get him the ball. So we have to do whatever we have to do per defense per week,” said John Donovan.

BC and Penn State kick Saturday December 27th at 4:30pm.