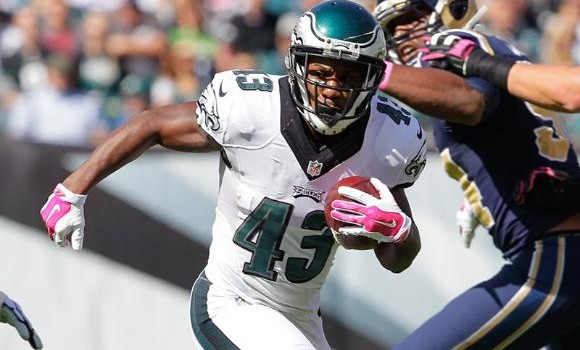 THE FANATIC'S BALDINGER KICKING MIKE AND IKE ALL OVER THE DIAL

Sproles had a hole wider than anything McCoy has had all year, Baldinger pointed out.

But what it is ain’t exactly clear.

Something is happening here between the hours of 10 a.m. and noon every day on the radio.

And it is exactly clear.

The WIP tag-team of Michael Barkann and Ike Reese, who carries the witless and superficial Barkann, are being unmasked for the frauds that they are by 97.5, the Fanatic. Baldinger gets to the point and knows what he is talking about.

Beginning five weeks ago, Eagles legend Brian Westbrook started sitting in on Monday and Friday on the Fanatic, and Tuesdays through Thursdays Brian Baldinger adds his expertise.

Westbrook is smart and unafraid to tell the truth about his former team, and he retired in 2010 after the eight seasons as a stellar running back for the Eagles and one year for the Niners. So he is still close to the game, and his comments are trenchant and on the money.

But it is on Tuesdays, when Baldinger co-hosts with Harry Mayes, that the battle becomes one-sided.

The first 10 minutes on WIP were dedicated to the death of broadcasting great Bill Campbell, a deserving subject.

However, Barkann and Reese admitted that they never heard the great broadcaster call a game. And still they talked about him, reminiscing as if they were old friends!

Then they opened the phones for callers and Mike and Ike began regurgitating Sunday’s game as if it were Monday and not Tuesday.

While on the Fanatic, Baldinger, who is a studio analyst for the NFL Network and calls games on the Compass Radio Network, had spent Monday watching the coach’s tape over at NFL Films. That is the version that allows experts who watch — like Baldinger and Ray Didinger — to discover what really happened and why.

Baldinger immediately said that the way the Eagles are playing, both NFC East rivals the Dallas Cowboys and the New York Giants, who come to the Linc Sunday night, are playing better than the Eagles.

And as far as what the problem is with Shady McCoy, which Mike and Ike are speculating about without having seen the tape? Baldinger admits that he really doesn’t know but that Darren Sproles played on the final drive on Sunday because McCoy already had toted the ball 28 times. That may be why he was on the sidelines.

And, Baldinger said, “And Darren Sproles got a whole bigger than anything McCoy has gotten all year” on his 25-yard scamper that salted away the game.

While on WIP a caller wanted to talk about how great Sonny Hill is on the radio. Mike and Ike concurred, with Barkann adding:

“I never saw the man play, but he could play!”

He doesn’t, and it is pathetic that he is hosting a sports talk show in a major American market, let alone one as smart as Philly.