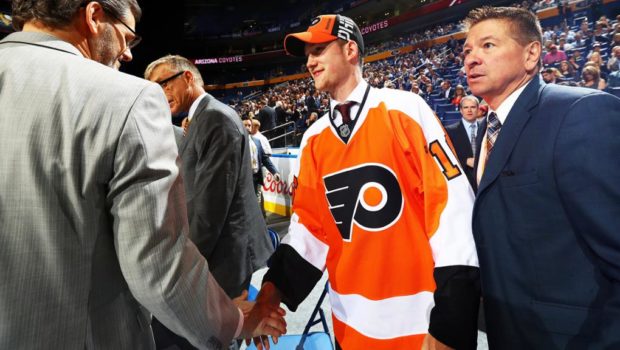 Pascal Laberge’s family and friends were cheering: his dad, his mom, his brothers, his uncle, his girlfriend and more. After all he had been through, the Flyers had selected him with the 36th pick of the 2016 NHL Draft.

He turned to his left and gave his dad, Luc, a huge hug.

“Congrats, young man,” his dad said, tears in his eyes.

He kissed his girlfriend and went down the stairs to receive his orange jersey, ending one journey, starting another.

“It was an unbelievable feeling,” he said.

Before the draft, Laberge’s agent, Allan Walsh, arranged for him to share his story with The Players’ Tribune because he wanted the NHL’s 30 teams and the hockey world to know the whole story.

His mother has multiple sclerosis. Last summer, he found out his stepmother had cancer and months to live. Then his father called him and his brothers into the living room one day, broke down crying and told them he had prostate cancer.

His stepmother died in September.

“It was like something out of a nightmare,” he wrote on The Players’ Tribune. “And I’d be lying if I said that playing hockey with all that going on wasn’t tough. It was. The truth is, it’s not always easy to concentrate on moving and passing the puck when people you love are fighting for their lives.”

Laberge struggled in training camp and early in the season with the Victoriaville Tigres of the Quebec Major Junior Hockey League. He was so depressed he withdrew from his teammates.

“It was really hard,” he said.

But then his coach, Bruce Richardson, called him into the office for a talk. Hockey could help. It could be his refuge. It could bring happiness to himself and the ones he loved.

“[He] just told me that if you perform at hockey, your parents will feel good about it,” he said. “So I just started to play hockey.”

Laberge began hanging out with the boys again, and he found he had support. When he had to miss a game to see his father, he received texts telling him that it was all right, that they were going to win for him.

Growing up in Sainte-Martine, Quebec, Laberge skated at a rink his grandfather helped build as a construction worker. He got to play thanks to the work his father did as a truck driver. He was coached by his father when he was about 7. Hockey helped bond the family.

“Hockey always has been my passion in life, and I want to be a hockey player,” Laberge said. “I never thought about quitting.”

No wonder, when asked what Laberge brought to the Flyers, general manager Ron Hextall said: “Character. The one thing we always talk about first is the character. We got, we feel, high-end character.”

A skilled, physical forward who can play center or wing, Laberge had 23 goals and 68 points in 56 games for Victoriaville, and two goals and four points in seven games for Canada at the 2016 IIHF World Under-18 Championship. He made an impression at the 2016 CHL/NHL Top Prospects Game in January with two goals and an assist.

“Every time there’s a big game, or a big opportunity, I always get this feeling inside me,” Laberge wrote on The Players’ Tribune. “I can’t explain to you what it is. But I felt it on that day, and I could just tell it was going to be a special game for me as soon as I got on the ice. Everything I was doing was working.

“I realized that I was just as good as the other players out there, and when it was over I was proud of how I’d performed. My whole family was watching on TV back home, so that made it even more special.”

The whole family was with him Saturday, his stepmom in spirit, everyone else in person. His mother is doing fine. His father had surgery and is cancer-free. Laberge is 18, headed for Philly, prospects camp and the future.

“It’s amazing,” he said, wearing his new Flyers sweater and Flyers draft cap. “You play hockey since you’re a young kid. Your dream is to get drafted into the NHL one day. To live that with my family here, it’s an amazing feeling. …

“My parents have always been supportive to me. I think they’ll keep giving that. That’s the dream for them. When I was young they didn’t think I’ll be drafted in the NHL one day. They’re so proud.”

After he was drafted, Laberge tweeted a picture of himself as a kid. He was standing on the ice next to Canadian Olympic goaltender Kim St-Pierre as she held one of her three gold medals, and he was wearing a Flyers sweater.