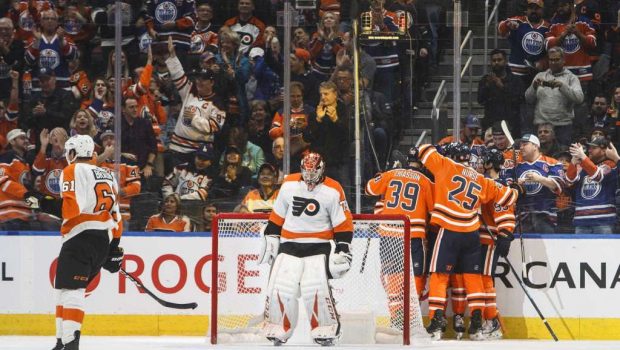 It’s only mid-October, so it’s way too early to consider any game a “must-win.”

But after they started the season with two wins, the Flyers have fallen into a four-game losing streak and tonight’s game against the Vegas Golden Knights may qualify.

The Flyers’ difficult start continued Saturday with a 4-1 home loss to the Dallas Stars.

Through the first six games, the Flyers’ offense has been wildly inconsistent. In fact, James van Riemsdyk, Shayne Gostisbehere and captain Claude Giroux all remain without a goal.

“Certainly, it’s frustrating,” van Riemsdyk said. “You see all these games. One goal makes a huge difference. It’s tough right now. Obviously, I am here to score goals. And it’s just not going in.”

Second-year goaltender Carter Hart started the season strong and earned his first career shutout against the New Jersey Devils on Oct. 9. In recent games, Hart has struggled, and he allowed three goals on 15 shots against the Stars.

The Flyers played well at times against Dallas and led 39-16 in shots. But ultimately they lost for the fourth straight time.

“We have our work boots on here,” coach Alain Vigneault said. “As a coach, when your team is giving 100 percent of what they have, and I believe that’s what we did tonight, you have to be behind your players, support them and trust them.”

The Golden Knights will be searching for their fifth win in six games. They’re off to a hot 6-3-0 start, including 3-1-0 on the road.

On Saturday, goaltender Marc-Andre Fleury made all 29 saves in a 3-0 shutout victory against the Pittsburgh Penguins.

Paul Stastny scored one of the three goals for Vegas. In the end, he was more happy for his goaltender.

“I was so excited he got a shutout,” Stastny said. “I think he earned it. He deserves it.”

Coach Gerard Gallant registered his 100th win with the Golden Knights, which was also the 100th regular season win in Knights franchise history (100-59-14).

“I thought it was our best game of the year, personally,” Gallant said after the win over the Penguins. “Guys stepped up and they battled for their goalie tonight, and our goalie was outstanding. I thought it was a good team game.”

The Golden Knights have been clicking in all phases as evidenced by their winning ways. They’ll be looking to wrap up the second game in this three-game road trip in the same fashion.

“We always kind of have each other’s backs and we’re watching each other,” Stastny told reporters. “Just those little 5-, 6-foot passes are the ones that kind of create a lot of momentum for the rest of the power play.”