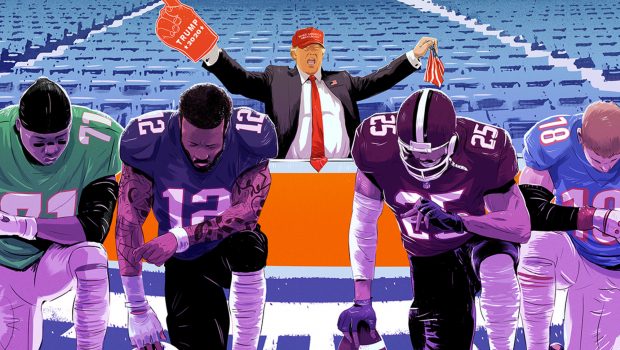 President Donald Trump tried to take a victory lap yesterday after the Big Ten Conference announced that football will be played this fall — but a university president said the return had nothing to do with the president’s push.

“President Trump had nothing to do with our decision and did not impact the deliberations,” the president of a Big Ten university who asked not to be identified told NBC News. “In fact, when his name came up, it was a negative, because no one wanted this to be political.”

Trump was quick to tout the announcement, tweeting after the conference said football would return this fall: “Great News: BIG TEN FOOTBALL IS BACK. All teams to participate. Thank you to the players, coaches, parents, and all school representatives. Have a FANTASTIC SEASON! It is my great honor to have helped!!!”

Several of the Big Ten schools are in pivotal swing states or states that could decide whether Trump is re-elected, including Pennsylvania, Ohio, Michigan, Minnesota, Wisconsin and Iowa.

The president has pushed for sports’ return as he seeks indicators that life is headed toward normalcy as the fall election approaches. Trump’s poll numbers continue to struggle as Americans give him low marks for the federal response to the coronavirus.

Strategists have warned that without football, voters will have a stark reminder that the United States has not recovered.

In a statement, Trump campaign manager Bill Stepien called the announcement “huge news, not just for college football fans, but for all Americans looking for key indicators that we can reopen our society and our economy, and do so safely.”

“College football is an enormous part of fall Saturdays for millions of Americans, and it is coming back, thanks in no small part to the leadership of President Trump,” he added.

In the weeks before the announcement, Trump posted a series of tweets pushing for the Big Ten’s return. The Big Ten, the Pacific-12 and other smaller conferences had announced that they would not play football this fall, while other major leagues, like the Atlantic Coast Conference and the Southeastern Conference, continue to plan for a season.

“No, I want Big Ten, and all other football, back – NOW,” Trump tweeted in late August, writing in a second tweet, “Disgraceful that Big Ten is not playing football. Let them PLAY!”