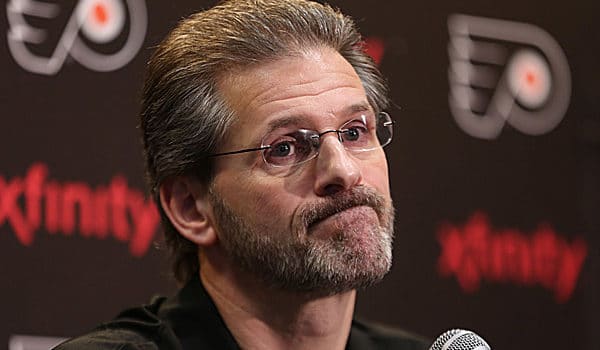 WHERE DO FAILED FLYERS GO FROM HERE? ASK HAKSTOL, HEXTALL!

In the wake of the Flyers’ blowout by the Penguins in the first round of the NHL playoffs, coach Dave Hakstol is looking forward, if he keeps his job:

“A couple areas for me were starts of periods, starts of games, starts of periods carry over from one period to the next. In terms of push back, I thought our team was pretty resilient this year, I’ll be honest with you. Whether it was from tough stretches or tough periods, more so for me is the carryover from one good period carrying over to another excellent period. That is maturity. We need to do a better job in that area… You can look at the number of [6-on-5] goals to tie games up, we had pretty good resiliency there. For me it’s the flip side of getting and going on the front side,” Hakstol told NHL.com

“It’s about quick puck movement. It’s not about one play, a lot of times what got us in the Pittsburgh series was the second play. It wasn’t the first pass, first pass boom on the tape, second one to get through neutral zone where there’s very little time and space especially when you get to playoffs and the pace that Pittsburgh plays at without the puck they present one of the larger challenges in the league. For me it’s not about team the speed portion it’s about what we’re doing with the puck and our play with the puck. I do think we improved a little bit in that area this year, I think it’s gotta be an area we keep growing in and be more efficient in.”

“There are certain players that aren’t assured a spot on this hockey club next year. If we can get better by bringing in someone in that’s better, that’s an upgrade, then we’re going to certainly look at that. There’s a lot details that go into a decision like that. If we can be better, we’re going to be better,” Hextall said.

“We felt halfway through the [2017-18] year that Oskar Lindblom was an upgrade, so we brought him up to see if he was. We felt he was. Same with when Travis [Sanheim] went back down. We brought him back up and he played very well. If we can upgrade our team, whether its training camp or halfway through the year, we’re going to do it. There’s obviously a development curve down below. You want to try and make sure a player’s productive enough and good enough at that level. There’s also the thing of a guy playing down there for 20-21 minutes and comes up here and plays 6-7 minutes. Number 1, How much is he going to help us here? Number 2: How much better is he getting on a nightly basis up there?” Hextall said.

Wayne Simmonds made it clear that he wants to remain a Flyer:

“This is where I want to be for the rest of my career, but I do realize at the same time that hockey is a business and whatever happens, happens. If I do end up signing the extension then that’s great, but hopefully I stay here and get to work my way into an extension. I know this year wasn’t ideal for me and they probably didn’t see for me what would require an extension, but this is definitely where I want to be,” Simmonds said.