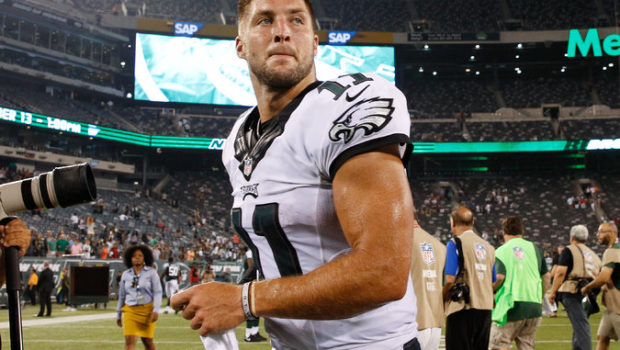 It turns out that failed Eagles QB Tim Tebow is stiffing Donald Trump along with the vast majority of Republican Party officials.

Tebow said he got off a flight from the Philippines yesterday and was greeted by news that he was scheduled to speak at the Republican National Convention.

No, Tebow won’t be speaking at the Republican National Convention next week in Cleveland, as we and the New York Times reported.

“It’s amazing how fast rumors fly,” Tebow said in a video post on his Facebook and Instagram sites. “And that’s exactly what it is: A rumor.”

Tebow, the former NFL quarterback who is still far more popular than many current NFL quarterbacks, hasn’t shut down a future job in politics. But he said he’s not starting down that road yet.

“My goal has always been to make a difference in the biggest way possible,” Tebow said. “If it’s one day in the political realm, then that’s what I’ll do. But right now I really believe it’s through my foundation and our amazing partners and fighting for kids that can’t fight for themselves.”

Other athletes, like golfer Natalie Gulbis and UFC president Dana White, were also reportedly scheduled to speak on behalf of Trump, the presumptive Republican nominee for president.