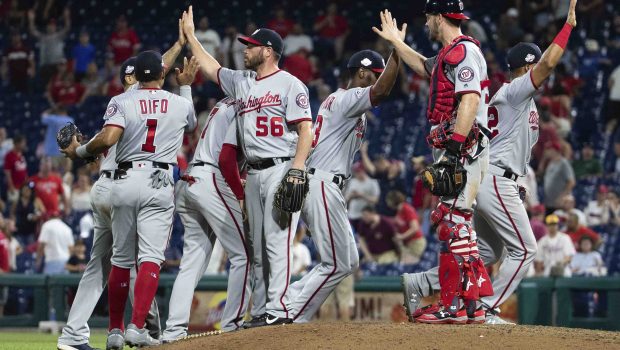 You’ve got to hand it to the Phillies.

Since they had a two-game lead in the NL East a month ago, they have found new and inventive ways to lose.

And, as a result, they wake up today 4 1/2 games behind the Braves.

They are sinking fast, and last night’s loss to the Nationals was a gut-wrenching example of why.

Pinch-running pitcher Vince Velasquez was called out for leaving second base early while tagging up for a game-ending double play that gave the Nationals a 5-4 win.

After Aaron Nola outpitched Max Scherzer for the second time in six days in a matchup of NL Cy Young Award contenders, the Phillies watched Washington rally for three runs in the ninth to take a 5-3 lead.

Wilson Ramos got the Phils within a run with a pinch-hit double in the bottom half, and Velasquez ran for the catcher. Greg Holland relieved and retired Jorge Alfaro on a fly ball to center, with Velasquez moving to third as the potential tying run. Velasquez slid past the bag but wasn’t tagged.

The Nationals, however, appealed that Velasquez left too soon, and he was called out. A replay upheld the ruling.

“I wasn’t nervous. I was trying to put pressure on the outfielder,” Velasquez said.

Manager Gabe Kapler told Velasquez after the game he should’ve stayed on second.

“He’s an inexperienced runner who gave us a valiant effort,” Kapler said. “He got overzealous.”

Anthony Rendon hit a go-ahead, two-run homer off Pat Neshek (1-1) in the Nationals ninth. The Nationals trailed 3-2 when Bryce Harper drew a leadoff walk from Tommy Hunter. Neshek surrendered Rendon’s 17th homer, and Washington added another run on an error after Ryan Zimmerman hit his third double of the game and stole third.

“I was just trying to see a pitch to hit,” Rendon said about connecting on a 1-2 slider.

It was the latest gut-wrenching loss for the Phillies, who are 6-13 since Aug. 8 and fell 4 ½ games behind NL East-leading Atlanta.

“It’s a super difficult loss to swallow,” Kapler said. “I don’t worry about this group. They’re tenacious and resilient.”

Alfaro and Odubel Herrera hit homers off Scherzer to hand Nola a 3-0 lead. But poor defense and a shaky bullpen blew it.

Nola gave up two runs — one earned — and four hits, striking out eight in seven innings. He threw eight dominant innings in the Phils’ 2-0 win at Washington last Thursday.

Scherzer gave up three runs and four hits in five innings, tying for his shortest outing of the season on April 4 at Atlanta.

“It was awesome,” Scherzer said of the comeback. “A great team win.”

Herrera, who hit a two-run shot off Scherzer last week, gave the Phillies a 1-0 lead in the fourth. Batting cleanup for the first time in his career, Herrera drove a 2-2 fastball into the right-field seats for his 21st homer. Alfaro connected in the fifth.

Nola took a shutout into the seventh before Rendon led off with a single and Zimmerman hit a double with one out. Matt Wieters followed with a grounder to first. Carlos Santana stepped on the bag for the second out but made an errant throw home allowing Zimmerman to also score.

Koda Glover (1-2) tossed a scoreless eighth for the win.