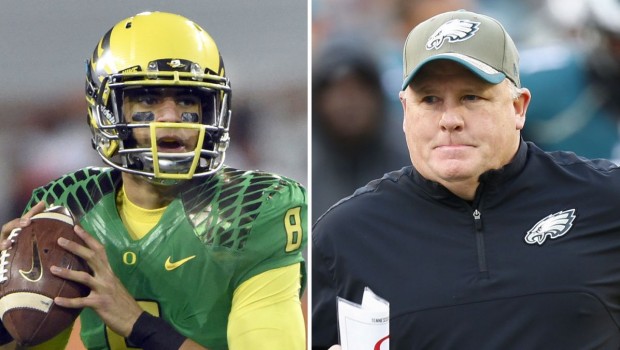 A FACT: EAGLES’ KELLY WILL NOT MORTGAGE FUTURE FOR MARIOTA

The NFL draft is only 10 days away — Thursday, April 30 in Chicago.

Which means we only have 10 more days to endure the ridiculous, unsourced, fact-free and therefore unbelievable “news” that Jimmy Kempski and other know-nothings have been foisted on us that:

Eagles Supreme Leader Chip Kelly is prepared to mortgage the future for Flavor of the Month Quarterback Marcus Mariota.

It’s not going to happen, as Bob Glauber, who has been Newsday’s national football columnist since 1992, has reported with sources:

The Eagles continue to be mentioned as a potential suitor for Mariota, who was recruited to Oregon by coach Chip Kelly. But a person familiar with the team’s plans said Kelly will not mortgage the future by trading up from No. 20 overall and that the coach is prepared to go with Sam Bradford, acquired from the Rams in an offseason trade, and Mark Sanchez, who signed a two-year deal last month.

When asked if he expects Kelly to trade up for Mariota, the person said, “No way.”