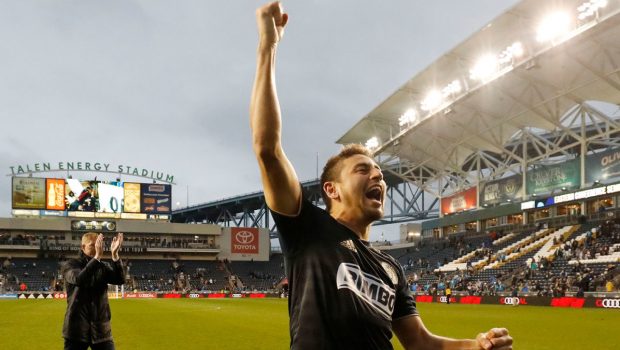 Marco Fabian’s chip late in the first extra time period was the game-winning goal for the Union, who stunned the visiting New York Red Bulls with two second-half goals for a 4-3 win in Major League Soccer’s Eastern Conference playoffs.

The third-seeded Union won their first-ever postseason game after three losses in the 10 seasons of franchise history. They will play next on the road against third-seeded Atlanta United on Thursday in the Eastern Conference semifinals.

Fafa Picault’s 78th-minute goal sent Talen Energy Stadium into a frenzy, tying the score at three after the Union had trailed 3-1 to start the second half. The Union scored three unanswered goals after halftime and absolved goalkeeper Andre Blake of his net-minding blunders.

Another apparent Union overtime goal was waved off for an offside violation, but the Union hung on for the final 15-minute extra-time period.

Fabian’s goal appeared to take a slight deflection that affected the ball’s path past Red Bulls goalkeeper Luis Robles and into the net, but the Mexican international was credited with the goal. Picault, who made a big impact on offense after entering as a 72nd-minute sub, got the assist.

The sixth-seeded Red Bulls appeared to have the game well in hand with first-half goals from Josh Sims, Tim Parker and Tom Barlow. Barlow’s goal came when Blake couldn’t catch a ball sent in toward goal, and the rebound came out to Barlow for a stoppage-time goal and 3-1 lead right before the halftime whistle.

Parker and Sims each netted their first goal of 2019. Barlow had just three in the regular season.

Sims, before leaving the game due to injury, struck from just outside the box on the run in the sixth minute. Parker, in the 24th minute, headed in a ball that cleared Blake’s hands and came out into the middle of the box.

Alejandro Bedoya (above) made it 2-1 six minutes later, bouncing in a low shot off the slick grass.

The Union got a goal from Jack Elliott in the 52nd minute after a free kick swung in to Sergio Santos, whose header rocked the crossbar. Elliott headed in the rebound to cut the deficit to one.

The Red Bulls, in existence since MLS began in 1996, have yet to win an MLS Cup. Their only appearance in the finals was a 2008 loss to the Columbus Crew.