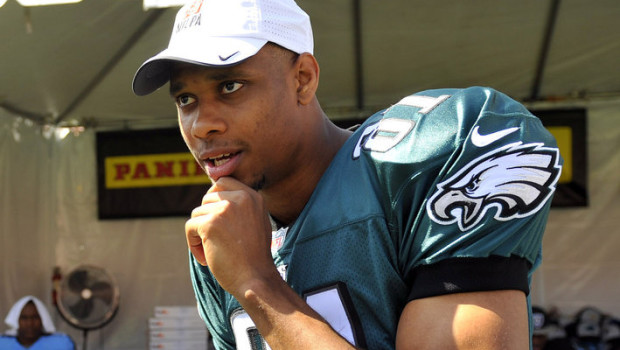 “I don’t got Vanderbilt classes no more,” the Eagles second-round wideout pointed out as a way of explaining why he excelled at Eagles OTA’s

The single most-tweeted and written-about sentiment emanating from the Eagles’ recent OTA’s was that Jordan Matthews is a gift from heaven and he will make Birds fans forget DeSean Jackson and Terrell Owens.

Typical of this hype was WIP’s Angelo Cataldi, who in one tweet proved he knows nothing about football or basketball:

“Jordan Matthews will have a greater impact in the NFL than Andrew Wiggins will have in the NBA.”

Which is ample evidence that someone who has never seen Matthews or Wiggins play, let alone in person, is the Donald Trump of Philly talk radio.

One of the guys who authored the controversial gang-ties article about Jackson has compared Matthews to another former Philly receiver whose tenure and departure were far more notorious.

Eliot Shorr-Parks of NJ.com recently compared Matthews to TO.

“Like Owens, Matthew stands 6-foot-3,” Shorr-Parks writes. “Also like Owens, Matthews is known for being a hard worker and a workout nut. Throw in the fact that they both wear No. 81, and it is hard not to think it is Owens out there catching passes during Eagles practices.”

Shorr-Parks writes that the similarities end when it’s time to talk to Matthews. In part because, unlike many receivers, Matthews doesn’t have much to say.

“Those who talk the most know the least,” Matthews said. Shorr-Parks says Matthews wasn’t talking about Owens, but Matthews easily could have been. Along with the rest of the diva receivers who seek out attention merely for the sake of it.

Specifically, Matthews also doesn’t want to talk much about his methods.

“I don’t like to reveal any secrets, but I try to be one of the first guys in” Matthews said regarding his typical arrival at the practice facility. “I don’t got Vanderbilt classes no more. It’s a lot easier. All I got to do is worry about football.”

It seems to be working. Shorr-Parks writes that Matthews has looked good on the practice field, making catches in coverage and establishing chemistry with backup quarterback Mark Sanchez.