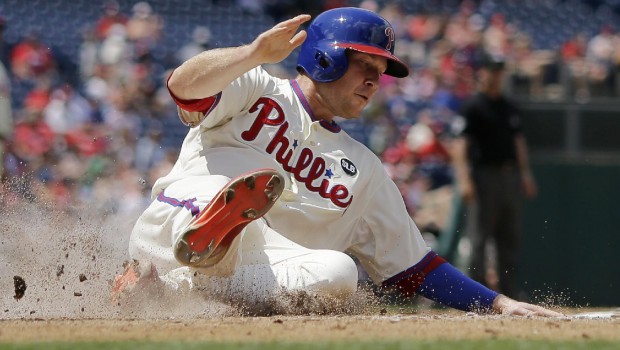 Cody Asche is at a crossroads in his Phillies career.

Long thought to have more potential than he has shown in the past few years, Asche is going to try to make the team in spring training at a new position: first base.

He lost his job at third base to Maikel Franco, and he could be pushed out of regular playing time in left field as Phillies manager Pete Mackanin looks at Odubel Herrera, Peter Bourjos, Aaron Altherr and possibly even Rule 5 Draft pick Tyler Goeddel in the outfield.

So the Phillies have asked Asche to try first, and he worked out there for the first time Saturday.

“It’s going to help him a lot,” Mackanin said. “We need Cody to try to get as many at-bats as possible. So I told him to get himself a first baseman’s mitt for a double-switch possibility or an occasional start over there. The more positions he can play … he could be an outstanding double-switch guy. He could get some starts. It’s a way for me to get him more at-bats.”

It would be easy for Asche to sulk and come up with a million reasons why he did not play well last season.

“You’re the one playing,” he said. “Create your own destiny. I’ve always been a guy who has the most confidence in himself. You won’t be able to talk me out of the belief that I’m better than most players. That’s just what I am and how I got here. And I’ll never lose that belief. That helps me when I do my work and come here to compete.

Because it’s simple, really. If he plays like he thinks he can play, Asche will be in the Phillies’ lineup.

“It’s pretty clear cut,” Asche said. “I haven’t done too much to solidify any sort of role right now on this team. So really it’s up to me to show him what I am, what I’ve tried to make adjustments on and how I can get better.”

And if it works out, maybe Asche will be the starting left fielder when he sees his old buddy Utley at Dodger Stadium in August.

So what did Utley write on that bat anyway?

“Just normal Chase stuff,” Asche said with a smile. “We’ll keep that between me and him.”