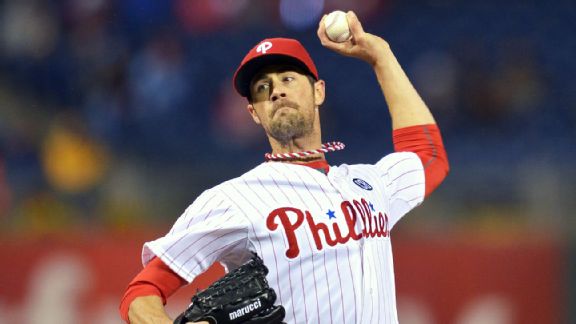 The team in red has only one blue chip to bargain with.

And that chip will — unless the Phillies’ feckless front office screws up — fetch a fistful of prospects to build a new contender with.

Phillies ace Cole Hamels has been told by the Phillies that they would love to keep him but also that it’s possible their situation could cause them to have to reconsider that.

While the Phillies obviously would prefer to hold onto Hamels, one competing executive put it this way: “That’s their only [valuable] trading chip.”

And if you believe ESPN.com’s Buster Olney, who is one of the best reporters in baseball journalism, Hamels is headed to the Boston Red Sox:

With interim Phillies president Pat Gillick saying he thinks his team is a couple of years away from contending, ESPN The Magazine’s Buster Olney speculates in his blog that it’s possible the Phillies would be willing to trade star left-hander Cole Hamels for a package that could help their rebuilding process.
Olney also points out that the Red Sox would likely be very interested in Hamels, as they wouldn’t have to make as big of a commitment to him in terms of dollars and years as they would Jon Lester on the open market in free agency:

For a team such as the Cubs or Red Sox — two organizations flush with prospects — Hamels might be incredibly attractive. Boston did not want to give a very long deal to Lester, offering him just four years in the spring before talks broke off, and with Hamels, the Red Sox would have only a four-year commitment. The Cubs are expected by rival teams to be very aggressive this winter in their pursuit of pitching, and they have lots of position player prospects, the sort of players badly needed by the Phillies.

Among the last-place Phillies’ other high-priced veterans, Ryan Howard wouldn’t bring anything back while Jimmy Rollins and Chase Utley have no-trade clauses they seem pretty intent on enforcing. Nobody would command the same type of return as Hamels, however.

The Red Sox and Cubs are two big-market teams that have shown interest in recent months, with the Cubs claiming him on revocable waivers this past summer and the teams unable to work out a trade.

Hamels should have big trade value even though he is well paid, with $96 million and four years remaining on his $144 million, six-year deal. Two other aces, Jon Lester and Max Scherzer, are free agents, but they are expected to command longer commitments, perhaps even seven-year deals. So for that reason Hamels may look especially attractive.

Hamels has a 20-team no-trade list, and he’s working on updating that now, as it is due Nov. 1.

As of Friday, these are the nine teams to which he can be traded without his consent: Dodgers, Angels, Padres, Cardinals, Nationals, Braves, Yankees, Red Sox andRangers. The southern California native (San Diego) can alter the list, though.

Gillick said in an interview with CSN that he didn’t expect to contend immediately as currently constituted, so some player shakeup wouldn’t be a surprise. “I think where we are right now, it’s probably a couple of years,” Gillick told CSN.