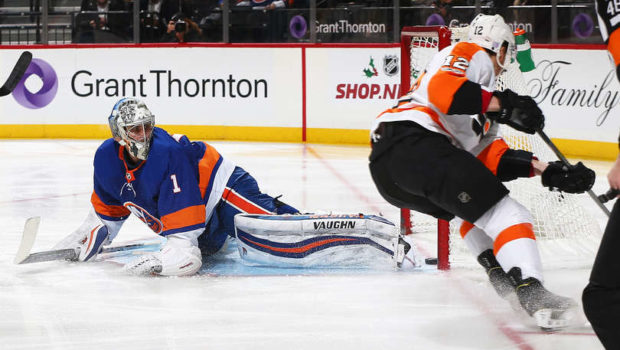 Once again Flyers coach Dave Hakstol made excuses for another Flyers loss, their sixth straight, 4-3 in overtime to the New York Islanders:

“We made a mistake in overtime tonight, we know that,” Hakstol said. “Other than that, I thought we played a [heck] of a road game on a back-to-back. We built through the night. Our third period was really good in terms of playing a sixth period in two nights against a fresh team.

“It stinks to work real hard to earn that point, and then we gave it away a little bit too easily, so that’s the part that hurts a little bit. But in terms of our game tonight, I’m not looking for little parts, I’m looking for growth in all the areas. Really tonight, I wanted to look for a true test of kind of the character of this team was. Our team answered. They played a [heck] of a character game.”

Josh Bailey scored 32 seconds into overtime to give the Isles the win at Brooklyn’s Barclays Center.

Bailey, who had two assists, scored on his own rebound after a remarkable play by John Tavares to seize control of the puck from Sean Couturier along the boards before sending a pass to Bailey in the slot.

Taylor Leier, Michael Raffl and Jakub Voracek scored for the Flyers (8-9-5), who have lost six games in a row (0-3-3), including 5-2 to the Vancouver Canucks on Tuesday. Brian Elliott made 35 saves.

Ho-Sang put the Islanders ahead 3-2 at 11:05 of the second period when he redirected Adam Pelech’s shot from the right point past Elliott.

Voracek tied it 3-3 with a power-play goal at 13:54 of the second when he beat Greiss with a wrist shot from the right face-off circle.

Raffl gave the Flyers a 2-1 lead 46 seconds into the second on a breakaway. His backhand shot went off the post and then Greiss’ skate before trickling over the goal line.

The Islanders capitalized on a 58-second 5-on-3 power play when Boychuk one-timed Bailey’s feed past Elliott to tie it 2-2 at 7:13 of the second.

Leier gave the Flyers a 1-0 lead when he redirected Travis Sanheim’s shot past Greiss at 6:02 of the first period for his first goal of the season.

Barzal tied it 1-1 with a power-play goal at 18:53 of the first when he took a cross-ice pass from Bailey and beat Elliott with a wrist shot from the left circle.

The Islanders went 2-for-5 on the power play. The Flyers were 1-for-2 but failed to convert on a man-advantage with 5:30 remaining in the third period.

“[Special teams] were huge,” Barzal said. “It’s a heck of a [penalty kill], and a lot of guys that like to battle. They did a great job against a pretty lethal power play, especially late in the game. Our power play did pretty well.”