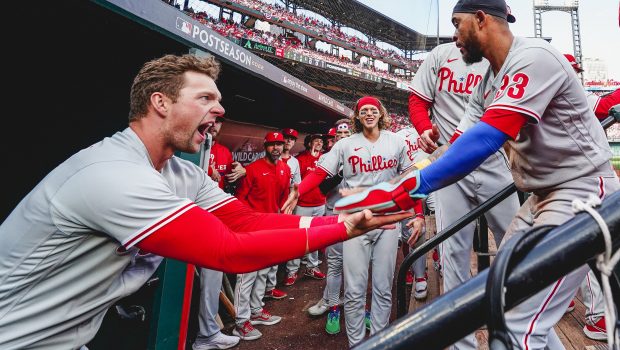 EXACTLY 11 YEARS LATER, PHILS GET SOME PAYBACK FROM THE CARDS!

Real Phillies fans — not the snowflakes who melt when Nick Castellanos swings at another bad pitch or Seranthony Dominguez has a terrible outing — remember Oct. 7, 2011, like it was yesterday. Ryan Howard writhing in pain on the ground in the batter’s box, unable to run because of a torn Achilles tendon that would effectively end his career as a great Phillies hitter.

Back in 2011, a vaunted Phillies team that won 102 games fell to a 90-win Cardinals team that shut them out for the final 10 innings of the NLDS.

On Friday, in Game 1 of the NL wild card series, history seemed to be repeating itself.

The Cardinals pulled ahead by a nose, despite the excellence of Phillies starter Zack Wheeler, and kept the Phillies scoreless for eight innings. Ryan Helsley, he of the 1.25 regular season ERA and 100 mph fastball, was coming back for the ninth.

After that game — in which Chris Carpenter out-dueled Roy Halladay — a great many of the people involved seemed to sense the magnitude of the loss, even if they couldn’t have known how long it would echo. In the aftermath of the Cardinals’ clinch, then-Phillies manager Charlie Manuel said, “Right now, I’ve got some anger, I’ve got some … I don’t know, I just feel very empty.”

Empty the Phillies would stay. They kept their core intact, almost certainly too long, and fell apart. The Cardinals watched Albert Pujols leave for Los Angeles, and kept winning anyway.

“I’ve thought about it a lot, because it became almost like a fork in the road — one went right and one went left,” Cardinals president of baseball operations John Mozeliak told the New York Times.

“It was such an epic game, probably one of the greatest games any of us have gotten to watch, two incredible pitchers going head to head, our first two hitters scored the one run and then it was just shutdown city. For us it became more of a springboard, and in the Phillies’ case, it became a turning point for their franchise.”

On Friday, the Cardinals had Pujols back, batting second. The Phillies had the fruits of an eventual rebuild that required a reboot. Even with aggressive moves and bountiful spending that lured and kept Bryce Harper, J.T. Realmuto, Kyle Schwarber and Wheeler, the franchise’s wait for a playoff berth would have extended to 12 years if MLB and the players union hadn’t agreed to expand the postseason field to 12 teams.

Down 2-0, heading to the ninth inning on Friday, none of the first eight hitters due up for the Phillies had ever played in a postseason series victory. Six of them had never played in the postseason at all. And the deficit they were tasked with overcoming seemed to predate them all.

After Rhys Hoskins struck out, Realmuto singled and then Helsley, the Cardinals closer, began to lose his grip on the zone. Struggling with a finger injury that took him out of his last appearance, he walked Harper and Nick Castellanos to load the bases.

Then came Alec Bohm. The lanky 26-year-old third baseman has borne the brunt of expectations and frustrations in Philadelphia. Friday, he took a wild 101 mph fastball off the arm, and popped up exuberant. There would be not be another zero. The Cardinals’ lead was now 2-1.

Jean Segura came to bat next. He reached the majors in July 2012 and has played steadily, productively ever since. Like the Phillies, he had never seen action in October in that stretch.

Facing Andre Pallante, a rookie whose presence in the game seemed designed to elicit a double play, Segura poked a ground ball to second base. It could well have been a double play, a sudden and deflating end to a game Wheeler started so brilliantly.

This one, though, snuck through a Cardinals infield that rated as far and away the best defensive unit in baseball. The Phillies led 3-2. Then came another grounder, a fielder’s choice that Paul Goldschmidt threw home too late, and another after that, a single that got by Nolan Arenado.

By the end, the Phillies had erupted for six runs, eventually winning 6-3 by flying straight into the Cardinals’ biggest strength. On Saturday, they will have the chance to punch a ticket to the NLDS, and they’ll have Aaron Nola on the mound to spearhead that effort. The series is far from won, but the team with Nola heading to the mound now has a significant upper hand.