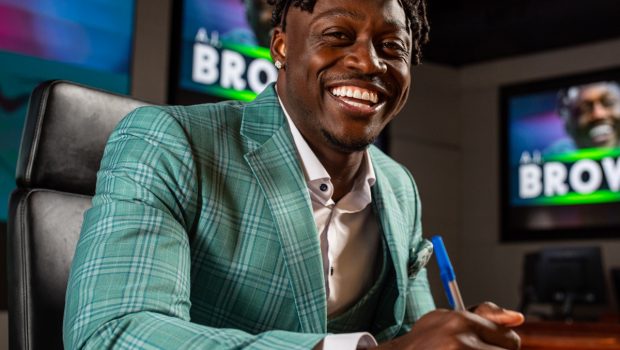 The Tennessee Titans weren’t willing to pay AJ Brown what he wanted in a long-term deal, so they traded him to the Eagles on draft night.

The Eagles immediately agreed to new contract with him.

Brown is thriving with the Eagles, catching 53 passes for 831 yards with seven touchdowns through 11 games. His 12th will come against his former team on Sunday.

“Of course I’ve come to peace about it,” Brown said, via Dave Zangaro of NBCSportsPhiladelphia.com.

“I’m with the Eagles, we’re 10-1, we’re doing a really good job here. Of course, early on I had mixed emotions but I changed my family’s life forever. That was the goal. I’m thankful for Tennessee but I’m here in Philly now.”

Brown noted that, “early on, I wanted to try to finish my career as a Titan. I think I stated that. I learned that it’s a business and you gotta do what’s best [for you] because they’re going to do what’s best for them. You grow up and that’s what I did.”

While Brown added that he’s tried to approach this week as if it’s another game on the schedule, it’s easy to see why it wouldn’t be.

“I feel like regardless of how the trade and everything goes down, I feel like me personally, I won,” Brown said. “I won because, like I said, I changed my family’s life forever. That’s the goal, especially growing up where I’m from and of course I want to do great and accomplish a lot of great things but that’s the reason why we play the game.”