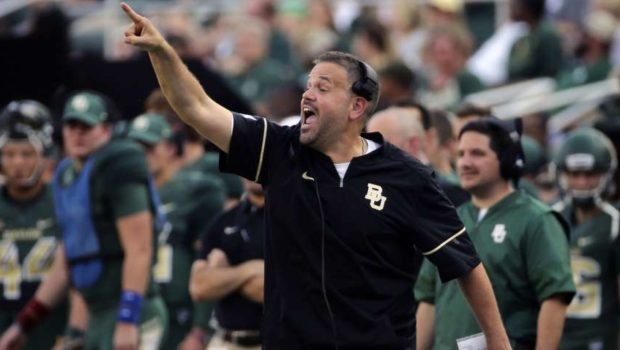 FOR EX-TEMPLE COACH RHULE, AN UGLY OPENING NIGHT AT BAYLOR!

His Baylor Bears lost to a lower-division opponent for just the second time ever:

Stephen Calvert threw for 447 yards and three touchdowns and Liberty opened its final FCS season with a stunning 48-45 win over the Bears.

Rhule was hired after a year with interim coach Jim Grobe following the scandal that led to the firing of two-time Big 12-winning coach Art Briles. The Bears lost an opener for the first time since Briles’ first game in 2008.

Baylor’s only other loss to a lower-division team was 18-17 to Division I-AA Lamar in the 1981 opener, when the Bears were coming off one of two Southwest Conference championships under Grant Teaff, the school’s winningest coach.

“This was not what we wanted tonight,” said Rhule, hired after consecutive 10-win seasons during a four-year stint at Temple. “It does not mean I’m not proud of them. I put this on me. I put this on the coaches. It’s our job to get it fixed.”

The matchup of private Christian schools was a big win for Liberty and athletic director Ian McCaw, who resigned the same job at Baylor last year after a scathing report over the school’s handling of sexual assault cases involving football players.

It was also a boost for coach Turner Gill, who flamed out in the Big 12 after just two losing seasons at Kansas.

“He’s here at Liberty University, so we’re all in it together,” Gill said of McCaw. “We work well together, and he’s a tremendous leader. I appreciate him, and we’re going to continue to work and have many more.” 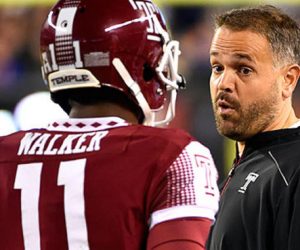