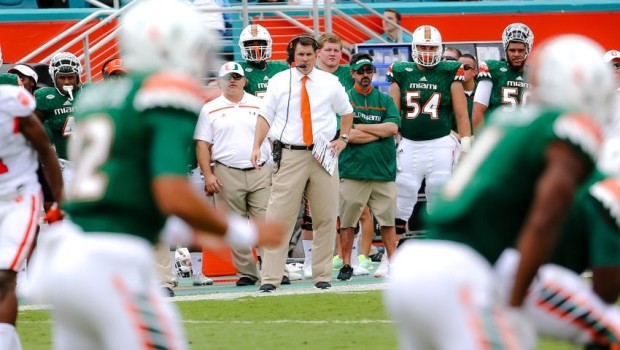 Golden coached Temple from 2006 through 2010, and the program improved steadily from 1-11 in his first season to 8-4 in his final season, including an appearance in the Eagle Bank Bowl after the 2009 campaign.

The next sound you hear emanating from the University of Miami will be the hammer coming down on former Temple coach Al Golden’s career at the U.

Clemson was scoring at will yesterday en route to a 58-0 win in a quarter-populated stadium, and Golden started looking for a parachute.

The worst loss in school history!

The Tigers led 42-0 at the half. The starters sat early in the third quarter. It could have been far worse than the final score of 58-0.

ESPN reports that a Clemson assistant coach said he was appreciative that so many recruits were able to see the Tigers’ win in person. The problem with that for Miami (and the rest of the league): The recruits were invited by Miami.

On Saturday, “if” became “when” for Golden.

“That’s it, isn’t it?” an agent texted during the game.

School officials told ESPN’s Brett McMurphy that a decision on Golden is not imminent, but those things have a way of changing once donors and administrators get involved.