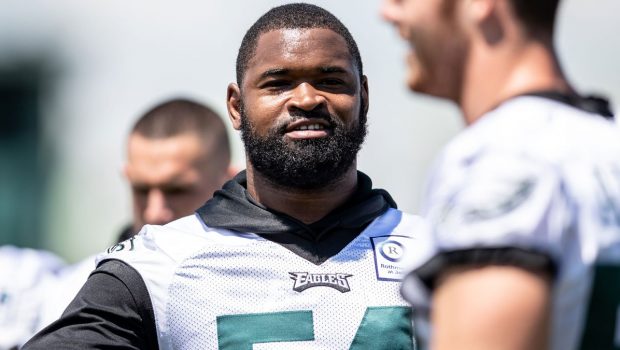 Linebacker Zach Brown has found a home with the Eagles.

Released in March by the Redskins with two years remaining on the three-year, $21 million contract he signed last offseason, Brown signed a one-year deal with the Eagles last month and spoke to reporters Monday for the first time about his new NFC East home. The 29-year-old suggested he already feels more welcome in South Philly than he ever did in Washington.

“Nobody has a problem with anybody,” Brown told the Washington Post of his new teammates. “Everybody is cool. Offense talking to defense. This locker room is different from the locker room I came from. There’s no cliques. It’s one big clique. I can talk over there and mess with the linemen, talk with them, chitchat, play cornhole. The running backs are right here, so I always give them s—.”

Could he do those things in the Redskins’ locker room, which he called home for the past two years.

One of the linemen Brown now shares a locker room with is all-pro right tackle Lane Johnson. The two had a history. In August 2017, during Brown’s first preseason with the Redskins, Johnson wrote in a first-person piece for the Players’ Tribune that the Eagles were “going to go down to D.C. and whup some [butt]” in Week 1.

“They are some new boys in town and we don’t need PEDs to win,” Brown tweeted in response, an obvious shot at Johnson, who was suspended for 10 games in 2016 after taking a supplement he thought was approved.

Brown and Johnson have since put their differences aside.

“I was messing around with him all last week,” Brown said Monday, via NBC Sports PhilLY. “There ain’t nothing wrong with good competition, but me and Lane, he’s right there, so we talk, chitchat every time. Good person.”

Brown finished second on the Redskins with 96 tackles last season despite losing his starting job to rookie Shaun Dion Hamilton in December. At the end of the year, Brown, who appeared to lash out at Washington’s coaches in a tweet he later deleted after a Week 9 loss to the Falcons, said he played most of the season with an oblique injury and called 2018 “probably one of my worst seasons.”

Brown signed a one-year deal worth up to $3 million with the Eagles in May.

“It feels different when you walk into the building,” said Brown, who hasn’t been to the playoffs in his seven-year career. “It’s a different mentality. Everybody comes to work, you joke around on the sideline, but you’re still paying attention and you’re out there doing your job. They want to win.”