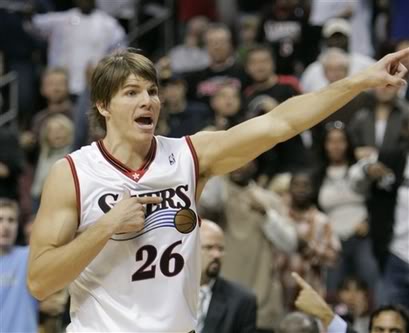 EX-SIXERS SNIPER KYLE KORVER MAY BE HEADING BACK TO PHILLY!

Shooting guard Kyle Korver is on his way to the Suns — who plan to waive him and allow him to become a free agent, league sources tell ESPN.

His expiring contract can be waived for the cost of $3.4 million — and he is consider signing with the Sixers, Los Angeles Lakers or Milwaukee Bucks once he clears waivers.

The Suns are trading the No. 4 overall pick in the 2017 NBA draft, underachieving forward Josh Jackson, to the Grizzlies with guard De’Anthony Melton, a 2020 second-round pick and a 2021 conditional second-round pick, league sources said. The Suns will also receive guard Jevon Carter, sources said.

The Grizzlies get a free look at Jackson, but have long evaluated Melton as a guard with an NBA staying power. History has shown that future Suns second-round picks are typically in the low-to-mid-30s.