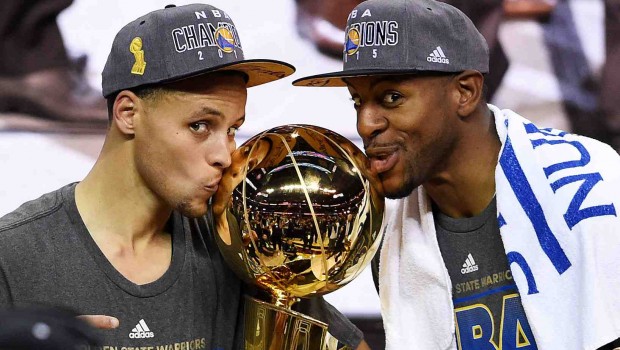 Over the past four years, Andre Iguodala (above right with Steph Curry in 2015) has been an Eastern Conference All-Star, a gold-medal-winning Olympian for the United States and the most valuable player of the NBA finals.

So has LeBron James, his anticipated defensive matchup in the NBA finals rematch between the Golden State Warriors and the Cleveland Cavaliers that begins tonight in Oakland.

But here is the point:

That is a résumé befitting a superstar shoe-company pitchman, meaning James — not so much a player like ex-Sixer Iguodala, who averaged 7 points a game this season, with 4 rebounds and 3.4 assists.

Iguodala, the Warriors’ swingman, fits few basketball stereotypes and positional characterizations. He is the epitome of That Essential Intangible Guy.

He can be a 6-foot-6 shooting guard, and while no great marksman, he has a knack for knocking down big shots.

He can be a small forward who can guard much bigger forwards, a defensive stalwart who bodied up on James in the 2015 finals, making life trying for the NBA’s most combustible package of power and speed.

They will most likely become closely reacquainted in game 1, and Iguodala’s impact — can he again hold his own without automatic help when James posts up on the left block? — will be a key to the series.

Iguodala is a widely respected veteran who, as a budding college star on the way to becoming the No. 9 pick (by Philly) in the 2004 draft, fancied himself as the next Scottie Pippen, not like Mike.

Unlike Pippen, a Hall of Fame talent who was always billed second behind Michael Jordan on six Chicago Bulls championship teams, Iguodala is at best the fourth-ranked conversation piece on the defending champion Warriors.