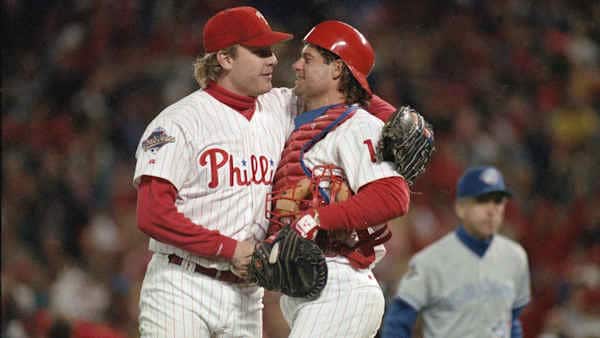 It was not immediately known which voter didn’t choose Jeter, who was listed on all 219 ballots made public by Ryan Thibodaux’s vote tracker before the announcement. The BBWAA will release additional ballots on Feb. 4 of writers who chose a public listing.

Former Phillies pitcher Curt Schilling (above left with Darren Daulton) was third with 278 votes (70%) in his eighth ballot appearance, an increase from 60.9% but still 20 votes shy. Roger Clemens (61%) and Barry Bonds (60.7%), whose careers were tainted by steroids, both showed slight increases. Bonds rose from 59.1% last year and Clemens from 59.5%. Clemens missed by 56 votes, Bonds by 57.

“Well, I look at all the votes that I got,” Jeter said. “Trying to get that many people to agree on something is pretty difficult to do. So that’s not something that’s on [my] mind.”

Larry Walker got 304 votes, six above the 75% needed and up from 54.6% last year. Walker’s increase of 22 percentage points in his last year of eligibility is the highest among the seven players to get into the Hall in their final year of eligibility, according to ESPN Stats & Information research.

He was making his 10th and final appearance on the BBWAA ballot and tweeted earlier in the day, “I believe I’m going to come up a little short today,” after checking the vote tracker and projecting he would finish at 73.3%.

Jeter and Walker will be inducted July 26 at the Hall in Cooperstown, New York, along with catcher Ted Simmons and former players’ association head Marvin Miller, who were voted in last month by the Hall’s Modern Era Committee.

“Everyone told me it was a foregone conclusion. I didn’t buy it. So it was not a relaxing day. There was a lot of anxiety,” Jeter said. ”I was nervous — sitting around, waiting for a phone call is something that is completely out of your control.”