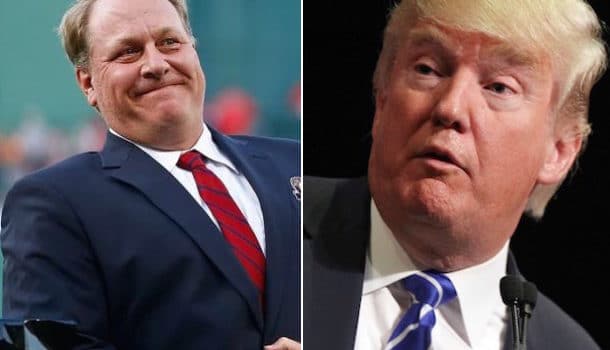 “Curt Schilling, a great pitcher and patriot, is considering a run for Congress in Arizona. Terrific!” Trump tweeted, roughly 45 minutes after a “Fox & Friends” segment about Schilling’s potential campaign.

Schilling on Sunday told Armed American Radio he is “considering going back to Arizona and running for a congressional seat — one of the blue ones,” and on Monday reconfirmed in a statement to The Arizona Republic he is “absolutely considering” entering a race to oust one of the five Democrats representing Arizona in the House of Representatives.

“The state is not the state I grew up in. Making Arizona citizens of EVERY Race, religion and sexual orientation 2nd class citizens to illegal immigrants is about as anti-American as it gets,” Schilling wrote in an email to the Republic.

“When you have homeless veterans, children, and you’re spending tax dollars on people smuggling drugs and children across our border someone in charge needs their ass kicked,” he added.

Schilling captured World Series championships with the Arizona Diamondbacks in 2001 and with the Boston Red Sox in 2004. He is an avid supporter of Trump, who has reciprocated with praise for the former professional athlete on Twitter.

“Curt Schilling deserves to be in the Baseball Hall of Fame. Great record, especially when under pressure and when it mattered most,” Trump wrote online in January. “Do what everyone in Baseball knows is right!”

Schilling responded: “Thank you Mr President! Do NOT give in on any of it! We are behind you!”

Schilling has a long history of offensive statements and social media posts. He said former Democratic presidential nominee Hillary Clinton “should be buried under a jail somewhere” in March 2016 and was fired by ESPN in April 2016 from his role as a baseball analyst after sharing an anti-transgender meme on Facebook.

The network had previously penalized Schilling in August 2015 for retweeting posting on Twitter a meme comparing Muslims to Nazis and subsequently suspended him for the remainder of the season.

Schilling also promoted a T-shirt advocating for journalists to be hanged from trees in November 2016 and reached a $2.5 million settlement with the Rhode Island Commerce Corp. in September 2016 after the state sued his failed video game company.