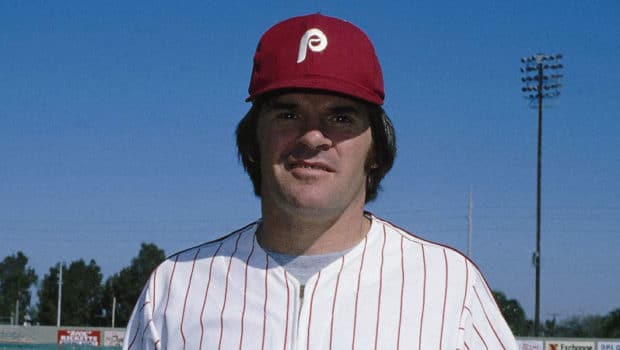 “I’m going to argue with baseball until the day I die,” Pete Rose said, “that baseball is juiced. I don’t care what anybody says. They’ll say it’s not, which they have to. I saw a ball bounce behind the dugout the other day in Anaheim and it bounced into the second deck. Now, there’s something going on there. I saw Bryce Harper break his bat in half, and hit a 420-foot home run in New York. That just doesn’t happen. I know the ballparks are small. It just seems to me that everybody who plays baseball today is a potential home-run hitter. You get tired of watching the highlights on MLB and ESPN. Every hit is a home run.”

Ex-Phillie Pete Rose may never be inducted into the Hall of Fame because he bet on baseball.

But that doesn’t mean he doesn’t have passionate opinions about the game he loves so much.

“I’m not real happy when I watch baseball,’’ Rose was quoted as saying by USA Today, “fundamentally the way it’s played. It seems like back in the ’70s and ’80s we worked on fundamentals. We spent a little more time in the minor leagues than they do today because there are 30 teams, and they’re going to hurry them to the big leagues.’’

He can’t understand teams’ hitting approaches these days, he says, when teams that put the ball in play wind up having more success than the all-or-nothing approach.

“The number of ballparks is a joke to pitch in,” Rose said. “It’s not really fair to be honest with you. You think of Camden Yards [Baltimore] … Cincinnati. Houston is a joke. They’re world champions, but it’s a joke to pitch there. … Colorado, Arizona.”

Rose, 77, who received a lifetime ban for gambling, certainly doesn’t want to condemn today’s era, but questions how MLB can even dare think about expansion.

“You know what I think baseball ought to look into that might help, splitting the season in half, like they do in the minor leagues. Think of how many teams have no chance of winning at the All-Star break. Now, if it’s a clean slate, and you add a couple of players.

“Besides not only are teams 30, 40 games out of first place, what’s your attendance going to be the second half?”

Maybe it would be different, Rose says, if the game was played the way it was in during his day. There were no second-base slide rules. You could wipe out the catcher at home plate. You could even argue with the umpire back in the days before instant replay.

“I probably would have been kicked out of every game by the third or fourth inning,” he said. “If I was a pitcher you couldn’t pitch inside. I don’t know who these geniuses are who keeps wanting to change these rules in baseball. Fans, every once in a while, like a fight at the ballpark. Instead of helping somebody up, kick dirt on him.”

“I don’t understand all of these analytics and all of the talk about dropping the hands and hitting the ball up in the air, because these ballparks today, you hit the ball hard, it’s going to go out of the ballpark.