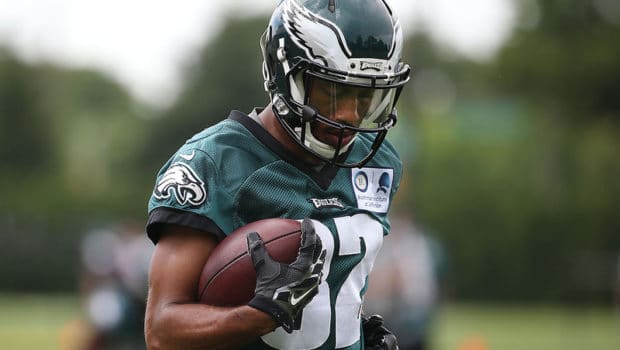 EX-GIANT WR REUBEN RANDLE GLAD TO BE AN EAGLE

Eagles wide receiver Rueben Randle’s first offseason with the Eagles was interrupted because he had to have his gallbladder removed.

Randle received clearance for limited work at minicamp this week, and he said he expects to be a full participant come training camp, where he’ll bid for snaps as an outside receiver with coach Doug Pederson saying that Randle has “really made an impact” when he’s been able to work this spring.

Randle didn’t have the desired impact during his years with the Giants, which were marked by benchings for late arrivals to meetings and miscommunications with Eli Manning that led to turnovers. Randle insists he “wasn’t really trying to do anything” to anger the Giants while describing himself as “excited to be a part of this” Eagles team.

“Unfortunate situation. Things happen, you’ve got to move on,” Randle said. “Miscommunication … They didn’t like my demeanor and some things … I was just judged wrong, read wrong. I gotta do better by that, learn from my mistakes … try to move forward here.”

Pederson has suggested recently that Jordan Matthews will continue to operate mainly out of the slot this season, which leaves Nelson Agholor and Chris Givens as Randle’s chief competition for playing time on the outside.