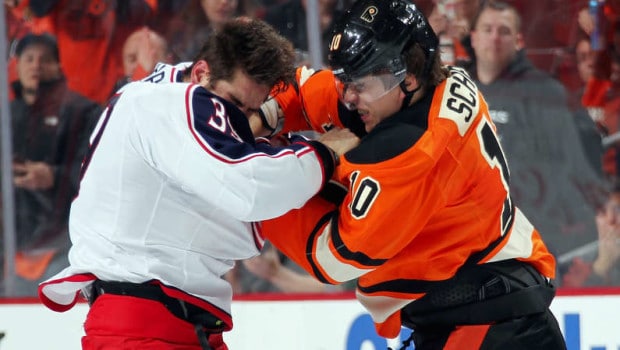 Former Flyers Scott Hartnell made sure he was healthy enough to play last night, and the Columbus Blue Jackets forward made Philly pay for trading him.

Hartnell had a goal and two assists, and the Blue Jackets ended a three-game losing streak with a 4-1 win against the Flyers at Wells Fargo Center.

The veteran was a healthy scratch Friday against the Florida Panthers but returned with a strong effort against the Flyers, where he played from 2007-14.

“There’s some highs and lows through the season,” Hartnell said. “You’ve got to have something snap you out of a funk and that (scratch) definitely snapped me out of my funk. It was a long day before the game, a long day yesterday … you don’t know what to do when you’re not in the lineup. Tonight I wanted to work hard, get on the puck, create some turnovers and make plays. We did a great job of getting pucks to the net and we were able to get a couple.”

Hartnell committed a late third-period penalty that led to aMontreal Canadiens power-play goal in a 2-1 loss Tuesday. His scratch reverberated throughout the Blue Jackets locker room.

“It’s a reflection of us too,” Blue Jackets captain Nick Foligno said. “It’s embarrassing for us to have one of our best players be out of the lineup. We should pull together. It’s never a singular thing; this is a team sport. It’s unfortunate that Scott had to go through that, but I think it made our team better and it made us realize that there’s no special treatment.

“And [coach John Tortorella] is very serious about the standard he’s setting here. And I think Scott handled it like a pro. You look at him, the way he answered today and the way he’s always been. He comes to work every day. You sit a guy out who you never question his work ethic, that sends a shockwave through the room. Message received.”

Tortorella said scratching Hartnell wasn’t what he wanted, but it elicited the response he was hoping for.

“With Scotty, he was so effective for seven or eight games when I first started,” Tortorella said. “And his game slipped and his discipline slipped. So it was sloppy. I don’t care how old, how may games they’ve played; if I think it needs to happen then it happens. But he’s a pro. For us to win, he has to be a big part of this. Sometimes it’s not a bad thing to sit and watch for a little bit, and he certainly answered tonight.”

Foligno had two goals and an assist, and Alexander Wennberg had two assists for the Blue Jackets (11-16-1). Sergei Bobrovsky made 26 saves and had an assist; it was the sixth straight game he allowed two goals or fewer.

Michael Raffl scored for the Flyers (11-11-5), who had a four-game winning streak end. Steve Mason made 30 saves.

Hartnell gave the Blue Jackets a 4-1 lead with a power-play goal at 15:17 of the second period, tipping in a shot by Wennberg. The goal ended the Blue Jackets’ power-play drought at 27, dating to Nov. 14 against the Arizona Coyotes.

“We had some video this morning,” Hartnell said. “Some positive video instead of video of how we’re not working, not moving our feet. It was a positive morning this morning looking at some power-play stuff. We moved the puck hard, we created some opportunities and were able to get a nice backdoor tap-in.”

Bobrovsky made the lead stand up with a few strong saves in the third period, including a stop on Matt Read from in front with his left skate. Bobrovsky is 11-6-1 with a 1.90 goals-against average and .936 save percentage in his past 18 games after starting the season 0-6-0 with a 4.72 GAA and .840 save percentage.

“He knows he’s a really good goalie,” Tortorella said. “I think he buckled down mentally and things started flowing for him.”

Foligno made it 1-0 with his first goal of the game at 8:55 of the first period, and Johnson made it 2-0 when his floater from the left point went off the stick of Flyers forward Scott Laughton and past Mason at 13:33.

“We needed to dictate the game and take their will away,” Foligno said. “That’s a team that’s full of confidence; you let them get going and they can just take over. That was a big thing, our start and coming out quick.”

“We see them score that goal, it’s back to work,” Foligno said. “That has to be our mentality. Some games it hasn’t been. We didn’t lose our focus, and that’s part of just understanding how you need to play as a team. We went right back at it and found a way to get a huge goal and the guys kept going.”

The Flyers had chances to get back in the game, including back-to-back power plays in the middle of the third period, but they couldn’t get a shot on goal on either.

“It wasn’t a good one for us,” Flyers forward Wayne Simmonds said. “From the start of the game we didn’t come out the way we wanted to. We didn’t play inspired hockey. You go back to the drawing table and figure out what you did wrong. … We’ve been playing pretty good hockey, but tonight wasn’t acceptable and I think we all know that.”