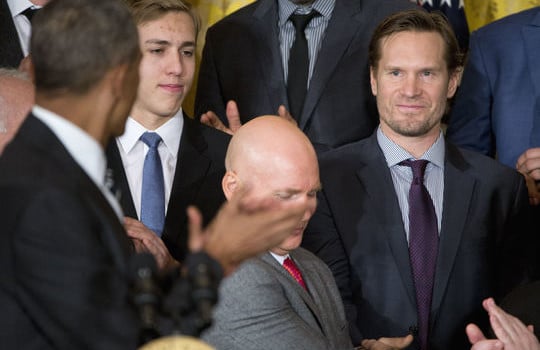 The Chicago Blackhawks were celebrated at the White House yesterday for winning the Stanley Cup again — their third visit in six years — so President Obama skipped past the usual suspects — Jonathan Toews, Patrick Kane, Duncan Keith, Corey Crawford and others have had their moment in the spotlight. Obama instead singled out former Flyer Kimmo Timonen (left), who came for the celebration, for his perseverance.

“His final NHL game, at the age of 40, Kimmo finally hoisted the Cup,” Obama said. “As an old guy, it makes me feel good.”

As he was the last two times, Obama was affable, funny, and eager to take credit for the Hawks’ success. When Obama took office, the Hawks were just starting to climb to the top of the NHL. Now, with 11 months left in office, the president’s getting greedy.
Click Here To Comment
0 admin February 19, 2016 Flyers