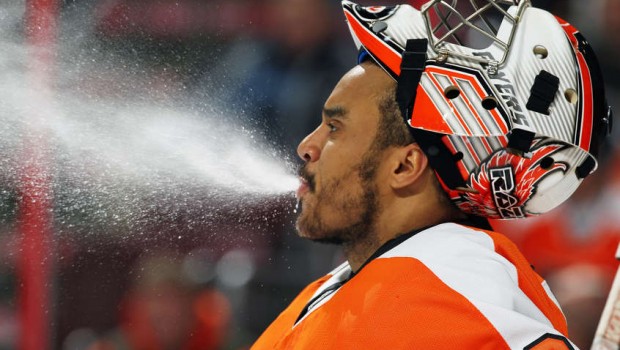 IF EX-FLYER BRYZGALOV CAN FIND WORK, WHY NOT RAY EMERY?

The Flyers have seemingly turned the page on a terrible 2014-15, hiring new coach Dave Hakstol out of the college ranks and drafted wisely.

However, there is a burning question left over from the bleached bones of 2014-15:

Goaltender Ray Emery (above), who had the following mediocre stats:

There aren’t many goalies left on the free agent market; if you want somebody with some NHL experience, you’re basically down to Emery or Jonas Gustavsson. And while Emery has been solidly in the “veteran backup” phase of his career for years now, he isn’t that far removed from posting some strong numbers — in 2013, he even earned a first-place vote for the Vezina.

Emery wasn’t very good for the Flyers last season, he’s old for a goalie at 32, and he hasn’t been fully healthy in a while. That’s three strikes right there.

But there’s an even bigger problem for Emery, Gustavsson, and any other goalies still looking for work: There’s virtually no market for them. Once the leaguewide game of rotating goaltenders had settled down a few days after the draft, there were virtually no NHL jobs left. The Bruins might want a veteran backup, but that’s pretty much it, and they could probably land somebody fairly cheaply via trade.

The best plan for an unemployed goaltender right now is probably to stay in shape and wait for an injury somewhere; if Ilya Bryzgalov can keep finding midseason work, there’s hope for all of them. Beyond that, there’s not much in the way of good news for guys like Emery. (Good luck to whoever has to break that to him.)