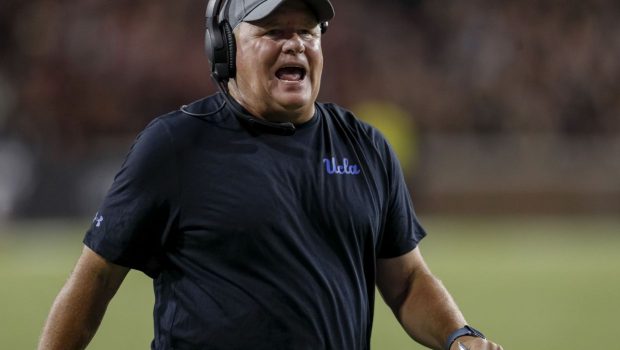 EX-EAGLES COACH CHIP KELLY IS STINKING IN THE WEST AT UCLA!

On a night when his for former team ended an endless series of NFL exos, UCLA coach Chip Kelly must be facing the fact that his UCLA Bruins are going nowhere.

Kelly credited the Cincinnati Bearcats after the 24-14 defeat dropped his UCLA record to 3-10.

He talked about injuries and academic issues that kept several of his players off the field in this season opener. He mentioned, several times, how young his team is — 48 new players, by his accounting, and a total of 87 freshmen and sophomores.

“We better pack some Powerade and Similac with this group,” Kelly quipped.

Yeah, that sounded like the Chip Kelly Eagles fans were used to during his disastrous nearly three years as coach

But he looks nothing like the wizard who took Oregon to the brink of a national championship, revolutionizing offensive tempo along the way.

He has a $23 million deal over five years and he is expected to turn UCLA around, sooner rather than later.

But in game 13 of the Kelly tenure the Bruins recorded their lowest yardage output since Nov. 3, 2016.

So far, that 23 mill has not been money well-spent.

In 2012, Kelly was the smartest guy in the room in college football. Bruins fans will have to summon their patience to quell the nagging doubts about whether their coach can get back on the cutting edge of the sport.

A guy who was a dazzling 46-7 at Oregon is now just another struggling Pac-12 coach, losing to teams outside the Power Five. It was Kevin Sumlin last week, going 0-2 at Arizona in season openers against Group of Five opponents. Now it’s Chip Kelly doing the same.

And while both Las Vegas and many of the rest of us expected a Cincinnati victory here, most of us also expected a significantly improved UCLA product coming off last year. This was not improved.

But one of the things you expect — or at least hope — when you hire Chip Kelly is that the rebuilding timeframe is accelerated.

Instead, it appears to be extended.