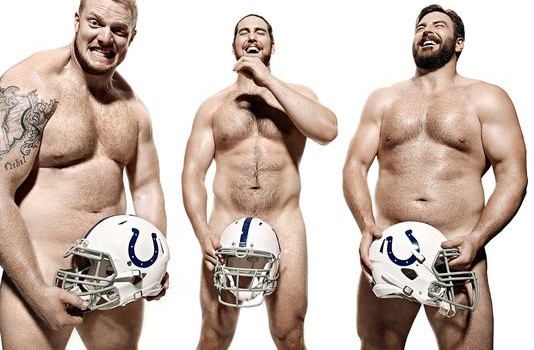 EX-EAGLE TODD HERREMANS (RIGHT) SURE HAS NOTHING TO HIDE!

While the Eagles have gone through the psychological storm of coach Chip Kelly’s cuts, trades and recriminations — hello, Shady McCoy — one of the ex-Eagles has landed on his feet.

Todd Herremans has found a home with the Indianapolis Colts, and he has nothing to hide.

Check out the photo above with Herremans on the right! Three Colts’ offensive linemen for the Indianapolis Colts — Todd Herremans (left in this photo), Anthony Castonzo and Jack Mewhort — are now naked for the world to see.

In one photo (above), the three hold football helmets in just the right places, while otherwise in the buff.

Herremans told the magazine that most people think of offensive linemen as “all just fat slobs.”

“Which is what it used to be, kind of,” he said. “But now the game has evolved into more fit, athletic offensive linemen. So I would say that Anthony is probably the leanest out of all of us, and I’m probably the chubbiest. Jack is somewhere in the middle.”

This is the seventh annual edition of the Body Issue, which includes photos, interviews and videos of the athletes.

“Our goal is to continue to evolve the issue year after year,” ESPN The Magazine and ESPN.com editor-in-chief Chad Millman said in a statement. “The ability to capture both the strength and vulnerability of these extraordinary athletes through such powerful images and introspective interviews is incredibly moving.”