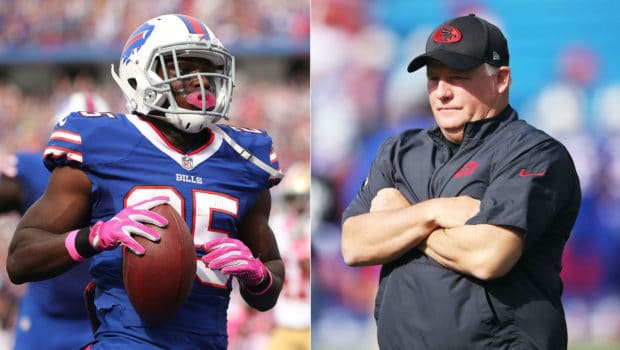 In fact, he may have gained a few since he was traded to Buffalo by the woeful Chip Kelly after the 2014 season (above).

With the exception of Zeke Elliott, who has been suspended for six games, Shady may be the NFL’s best running back!

So why would the Bills consider trading him?

They’re not going to contend in 2017. But trading him?

Evan Silva of Rotoworld said Friday that he expects Buffalo to listen to trade offers for both McCoy and Tyrod Taylor, and he would not be surprised if the Bills initiate some of those calls themselves.

McCoy, who rushed for 21 yards on four carries and caught one pass for 11 yards in Thursday’s preseason game against the Eagles, recently turned 29. He carries a cap hit of around $9 million for the next three seasons. If the Bills don’t think they are close to contending, it would make sense to get something in return for the star running back now.

If the Bills are going to make a trade, McCoy seems most likely to go. His recruitment of one former teammate earlier this offseason fell on deaf ears, and it would not be a surprise if he is unhappy in Buffalo.