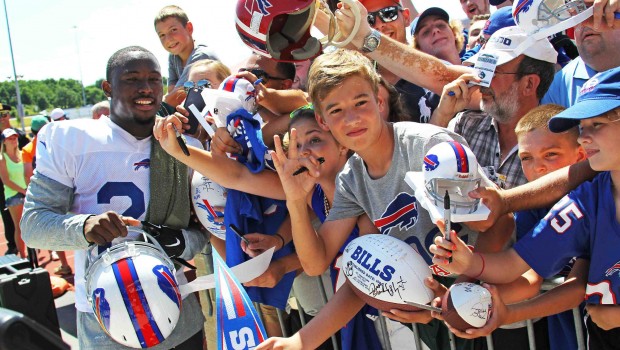 Shady McCoy sure has a way of looking like a goofball, what with his recent party plans, stiffing a server in Philly, making racially tinged accusations about Eagles coach Chip Kelly and, well you get the picture.

But now that he is a member of the Buffalo Bills, his on-the-field exploits are front and center.

After his arrival in March excited much of the Bills’ fan base, the running back decided to give back on the first day of training camp.

A little more than halfway through practice Friday, McCoy picked up a ball along the sideline and threw it into the stands, drawing a loud chorus of cheers.

”I always try to get the fans involved,” said McCoy, who was acquired in a trade that sent linebacker Kiko Alonso to the Eagles. ”No player is there actually looking forward to camp. So the fans come out here and cheer us up and get us going. I try to do the same.”

There was plenty for the estimated crowd of 3,000 to be excited about upon getting its first glimpse of the new-look, Rex Ryan-coached team in suburban Rochester.

The first big cheer went up about 20 minutes before practice began, when Ryan marched out on the field with numerous cameras in tow. A chant of ”Freddie! Freddie!” went up, when fan-favorite veteran running back Fred Jackson emerged. And a buzz went through the stands once fans spotted new owners Terry and Kim Pegula along the sideline.

Terry wore a red Bills golf shirt, while Kim had on a red Bills T-shirt with the words ”Let’s Turn It Up” printed on the back. The couple, which also owns the NHL Buffalo Sabres, made their camp debut since purchasing the Bills for an NFL-record $1.4 billion in October.

Add it up – new owners, new coach and several high-profile player additions – and it’s all why this is one of the most anticipated starts of a Bills training camp in more than a decade.

”I thought it was going to be tough to find something that would top jumping out of a plane,” Ryan said, referring to his parachuting adventure two weeks ago. ”But as a football coach, I think this topped it.”

Ryan is the former New York Jets coach who took over the Bills in January after Doug Marrone stepped down abruptly on Dec. 31. Ryan inherits a team that hasn’t made the playoffs in 15 seasons, but is coming off a 9-7 finish, Buffalo’s best since 2004.

”It’s just a different feel,” Ryan said, comparing the start of this camp to his first with the Jets in 2009. ”I don’t know if it’s because it is my second chance or whatever. I think I’m better prepared now than I was then.”

It’s a fresh start for McCoy, too. The two-time All-Pro and the NFL’s 2013 yards-rushing leader is adjusting to a new environment after feeling he was discarded by Kelly after six seasons in Philly.

The Bills are counting on McCoy to be the workhorse of a ”ground-and-pound” run-first offense being introduced by Ryan and new coordinator Greg Roman.

Though McCoy had questions about the Bills immediately after being traded, he’s quickly become comfortable with Buffalo.

When reminded he was in suburban Rochester, McCoy tapped his jersey and said: ”You see my logo, man.”

McCoy has already created a few stirs in Buffalo over the past few months.

In May, he questioned whether Kelly had racial motivations in trading McCoy to Buffalo and releasing star receiver DeSean Jackson a year earlier.

Last week, McCoy turned heads when he posted on his Instagram account a ”Females Only” invitation to a party he was scheduled to host. McCoy eventually removed the invitation after the Bills informed him he could not use the team’s logo.

McCoy said he canceled the party because of the media attention the invitation attracted.

”I should never have posted it,” he said. ”I’ll take the blame for that.”

McCoy then changed the subject.

”That’s past me. That sounds small to me,” he said. ”There’s so many more things in the NFL to talk about then our party.”

Ryan said he had only one problem with McCoy’s party.

”I did not get an invite,” Ryan said, breaking into a smile. ”I’m a little disappointed about that.”